Time for another little update on what I’ve been doing recently, as I was pretty busy at the beginning of this week, watching a fireworks display, attending another theatre show, going to a disability exhibition, and meeting other people with aniridia. 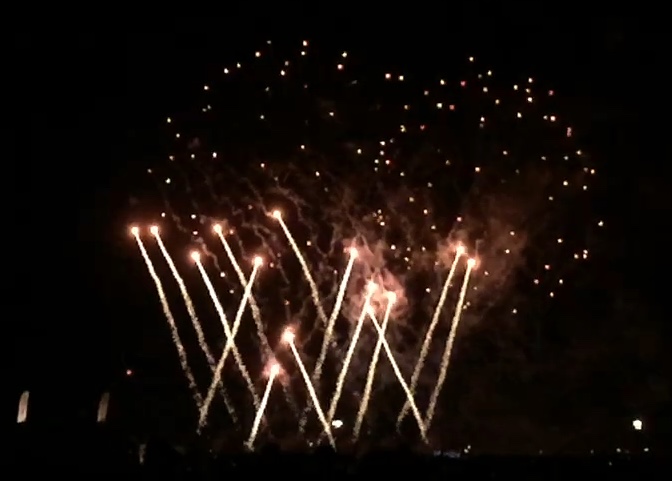 On Saturday night I was very kindly invited by Emily from Fashioneyesta to join her and her family at the Blackheath Fireworks. This is one of the only displays in London that’s still free to attend – although they were keen to ask for donations on the website and over the tannoy on the day, so I don’t know how long that aspect will last. It wouldn’t surprise me if they start charging for it at some point. In a way it is only fair really, given the severe constraints local authorities have on their finances these days. So it’s great that they are still prepared to put it on for nothing.

And because it was free, the area was packed with people. Not so much that you couldn’t walk around, but still extremely busy. I held on to Emily’s mum Emma just to be sure I didn’t lose them in the crowds in the dark, though Emily’s cute white wooly hat was a good target to focus on too.

We found ourselves a good spot to watch the fireworks pretty easily, and it was a lovely 10 minute display, which I’ve posted a video of. Emily’s guide dog Unity was safely at home, but she wouldn’t have been bothered by any firework noises going on nearby, she’s very calm around that kind of thing.

We did have a look at the funfair to see if we could go on one of the rides for a bit of fun, but it’s not a good place to be when you’re disabled. The number of people made it very difficult to get around for a start. And because we were inevitably taking a few seconds longer to pay at the one ride we did approach, we were being pressured by a drunk guy behind us and the staff at the booth in front of us to hurry up, which slowed us down further. So we left. It wasn’t worth fighting, as the ride clearly wasn’t going to be worth the £5 cost (yes, really!). A shame, but not unexpected. It had been wishful thinking by us really – accessibility is rarely a concern of travelling funfairs like this to be honest, at least in our experience over the years. It’s all about the money. Never mind, we tried.

So we drove to The Station pub in Hither Green, as it was less busy there compared to the overflowing venues in Blackheath. And that was a very wise move, as we were able to get a table together, and we all had a lovely chat there for a while. I then got a train home from Hither Green station across the road. It was easy to go one stop to London Bridge and then change to the Jubilee Line from there. So I got home safely. All in all, ignoring the funfair blip, it was a really lovely evening. The fireworks display was great, and it was wonderful to meet Emily’s parents. 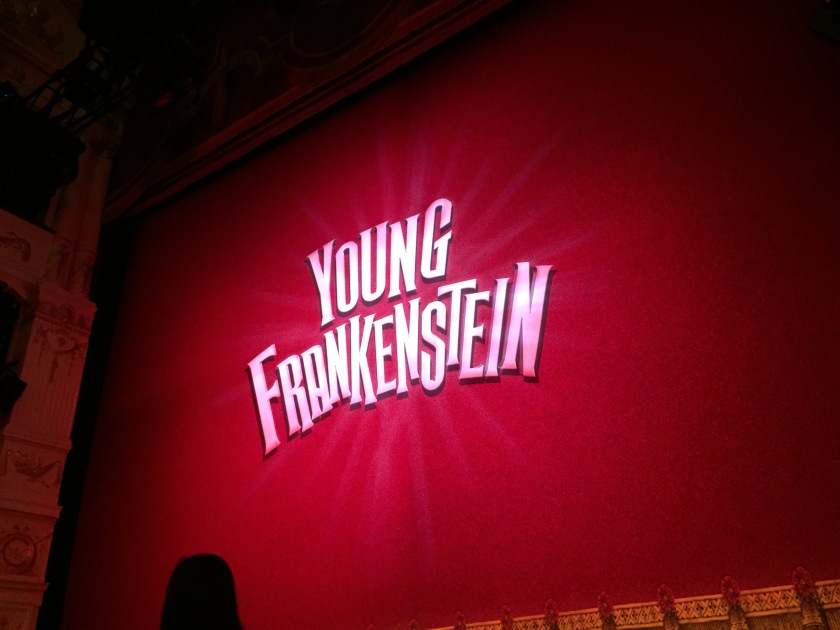 On Monday night I went to my latest theatre show – Young Frankenstein – which I had been very keen to see for a number of reasons. Firstly, it sounded like great fun. Secondly, it stars Ross Noble, one of my very favourite stand-up comedians (he’s stopped releasing DVDs now by the way, of which I have them all to date, as he feels the market isn’t what it was, so this year you can download his shows from his website instead). And thirdly, the show was recommended to me by Emily Davison after she watched it with her mother, and anything that Emily recommends is guaranteed to be good.

So I eagerly booked up to see Mel Brooks’ musical comedy at the Garrick Theatre, This is the first play I’ve been to without audio description this year, but that’s fine. As long as I have a good seat for a show, I don’t mind if audio description isn’t available. It is possible that an organisation like VocalEyes may offer audio description for this show one day, it wouldn’t surprise me if they did. But I was keen to see it, and Ross Noble is only in it for a limited period I believe, so I didn’t want to miss him. I managed to get a good seat in row C for this performance too, so I was able to look at things closely with my monocular at various moments during the performance, and that worked out nicely.

And it was amazing. I can’t give anything away, naturally. But I didn’t stop smiling from start to finish, because I was laughing a great deal. It’s a delightful, feel-good, hilarious comedy that doesn’t take itself too seriously, and you can tell that the cast are enjoying themselves. Ross Noble is an inspired choice for his role as Igor, he nails it. Even when he’s not saying anything, his facial expressions and body language always make you laugh. The other familiar name to me was Lesley Joseph (Dorien from Birds Of A Feather), and she’s also wonderful here. As are the entire cast, they’re a superb ensemble. The music and choreography are brilliant too, I had a few of the songs running around my head aftewards. So I highly recommend going to see it, it’s well worth it.

After my first visit last year, I went to Sight Village in Kensington again this week. It’s an event that showcases technology and services available to visually impaired people, so is attended by visually impaired people, their partners and carers, and professionals who work with people with sight loss. So it’s a great place to find information and chat to people. The main Sight Village event is in Birmingham every July, but they do roadshow events like this around the UK during the year as well, so it’s well worth looking out for events near you.

On this particular visit, I ended up talking to people at various stalls, namely:

And that’s just a selection of the many stands that were there. I spent a nice few hours there. It’s always well worth looking around that event, especially as it’s free.

Afterwards, I went to the Aniridia Meetup at Caffe Nero across the road, which I helped James from the Aniridia Network to promote on social media. We had a very good turnout as well, with 10 people turning up, some of whom I’d met at last year’s meetup, and some of whom were new. Everyone was very sociable and chatty, so we had a very pleasant evening getting to know each other.

This was just a small get-together of course – the main event for UK people connected with aniridia will be the 2018 Aniridia Network Conference, which is being held in London. You can register your interest via the link on the conference page if you’d like to attend. I’ll be going, which will be the first aniridia conference I’ve ever been to, so I’m looking forward to it.

And that’s it, another enjoyable few days over and done with. Beyond that, I haven’t got anything major planned for a week or so, beyond a meeting that won’t be worth writing about here. But that’s by intent really. I’ve got various things to catch-up with, including for this blog. I’ve had a lot of inspiration for content lately, as a result of people’s comments (thank you – all suggestions are always welcome!), or conversations I’ve been having with friends, or other things that have just come to mind.

So I’ve got a pile of draft posts written on various things, some of which are pretty much ready to go. I just want to produce accompanying videos in some cases before I publish them. One of those is done already, so that’ll be going live this weekend, along with the 2 posts that go with it (it’s a big topic!). Then I’ll aim to get the others out at regular intervals. So keep an eye on my blog and my Youtube channel over the coming days and weeks, there’s quite a bit in the pipeline right now. 🙂

The 5th European #Aniridia Conference is taking place online this weekend (31 July to 1 August). It's a huge opportunity for people affected by the condition to get together - wherever you are in the world - and hear from #scientific and #medical professionals who are at the cutting edge of #research into this #RareDisease. There will be lots of opportunities for questions and discussions throughout the event as well, so do come along and get involved!
Whenever I venture back into #London for the first time in a while, the #SouthBank of the #RiverThames always beckons me first. I've always enjoyed walking along here since doing so with my family as a kid. Some sections are fun and lively, with all the people, entertainers and attractions, while others are wonderfully relaxing and peaceful. And throughout there are beautiful views of the #river and the many iconic bridges and buildings along its route. So it's always nice to take a wander along here.
Mum's second vaccination: ✅
Made the most of the gorgeous #sunny weather with a lovely stroll around #WestHamPark today. Happy #Easter to everyone! 🌞🐣🌻
Had my first #CovidVaccination this morning. ✅ Very quick & easy, really friendly & helpful staff, still no side effects 2 hours later. Very relieved that I'm now protected, given that I'm a carer for my mother. Thank you so much to @NHSEngland & all the scientists for keeping us safe! 🥰🙌
What a year that was, huh? I certainly don't want 20/20 vision now if that's what I'll see! Still, while the year has thrown its challenges my way, I'm glad I've been able to navigate its stormy waters and get through it successfully. Many others haven't been so fortunate, however, and our thoughts are with all those whose lives have been turned upside down during these last 12 months for whatever reason.