Although I was born in the early 80’s, I grew up with a lot of 60’s music, because my parents enjoyed it and so had plenty of it in the house. So I’ve always enjoyed listening to tracks from that era, including the hits of Motown. So many amazing and timeless artists and songs have come out of the Motown movement, that people still enjoy today, and that still influences many musicians today.

So it’s only right and fitting that we now have Motown The Musical to celebrate it, and I got to see it this week at the Shaftesbury Theatre, with my friends at East London Vision, for an accessible performance organised by those wonderful folks at VocalEyes.

When you’re in the lobby of the theatre, the big indicator you get as to just how huge Motown was is the massive Wall Of Fame display, listing hundreds of performers. It’s an incredible roll of honour. Sure, there are many names on there I don’t know, but there are a lot of big stars on there too. It is quite small print, but we had people with us who could read some of the names for us. And it just goes to show how many musicians there are given that, even on a massive wall display like that, the print still can’t be all that big! 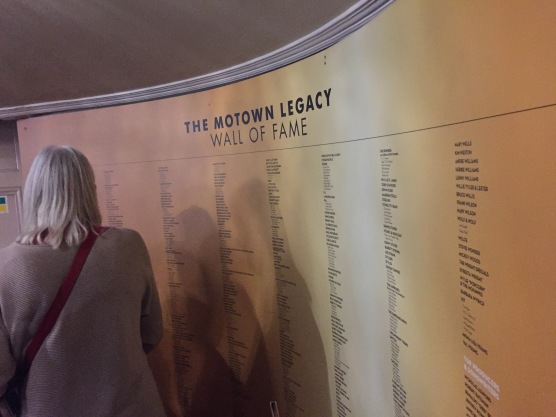 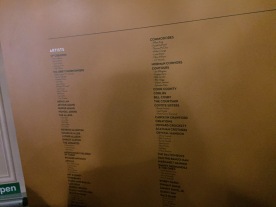 The big treat for us though was the touch tour, where we got to go up on stage and take a close look at things, including a mixing desk with an old style telephone on it, and a selection of wigs and costumes for the various singers being portrayed (Diana Ross & The Supremes, The Four Tops, The Temptations, The Jackson 5, Marvin Gaye, Smokey Robinson, Stevie Wonder, etc).

It was great to handle and see everything all close up, and really interesting to talk to the team who work on putting it all together. The people who work behind the scenes on shows like this often get overlooked, because you don’t get credits at the end of a musical like you do a film or TV show (unless you pay for a programme perhaps). So it was great to be able to meet some of them and thank them for their time and work.

Getting to handle and take a close look at the costumes was my favourite part, as they were so shiny and colourful and detailed, often covered with gems or beading that glittered brightly in the light. One particular large red dress for Diana Ross was really heavy and really beautiful, and was their most expensive costume. So we were very privileged to get to handle that. We also found out a few of the tricks of the trade behind the quick costume changes they have to do – shirt buttons that are actually poppers, Velcro collars, elasticated cuffs, etc, which means a performer can quickly change costumes in under 30 seconds if need be. They really do have to think of everything! 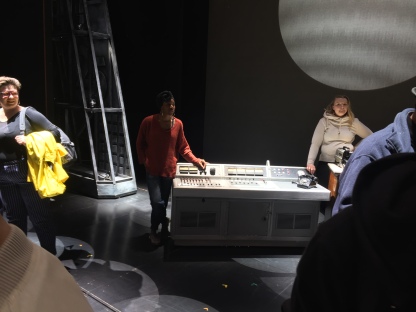 And then the show itself was amazing, as you’d expect. It tells the story of Motown and its founder Berry Gordy, right up to the 25th anniversary concert. And it’s very interesting, as I’d only ever been familiar with the music, not the history or the story of Berry Gordy.

But of course the music is the main thing here, and there’s a lot of it! As well as a lot of songs being performed in full, there are also extracts from other songs mixed in as part of the narrative as well, so you really get a good mix of music. There were plenty of songs I knew, and a few I didn’t, by a great variety of artists as mentioned earlier.

The singers, dancers and house band are all incredible and really do the hits justice, with fantastic voices, choreography and orchestration. The upbeat tracks easily get you tapping, clapping and even singing along (though obviously you shouldn’t sing in a way that’s disruptive to audience members around you!), and the slower ballads are beautifully performed. The occasional moments of audience participation are rather fun as well, especially one segment with Diana Ross and the audience, but I won’t spoil it here.

And visually the show is stunning as well, with gorgeous costumes as already mentioned, colourful lighting and backdrops, psychedelic animations, old film footage from the era, and clever set changes with moving girders and panels that continuously changed the shape of the space. We also had audio description using headsets, to help make sense of all the visual stuff that was happening. And that worked really nicely. Naturally we had to turn them up during the louder musical sections, but that was fine.

It was also announced that a couple of guys who work on the show would be running the London Marathon this coming weekend for Guide Dogs, which is great, and best of luck to them! Unfortunately I can’t remember their names or point you to their donation page.

However, as a related aside, and because I don’t personally know anyone who’s running the marathon this year, I’m putting my backing behind newsreader Emma Moore. She’s part of Absolute Radio’s Christian O’Connell Breakfast Show, which I love listening to every day. Emma’s supporting a charity that I hadn’t heard of before – MACS (Microphthalmia, Anophthalmia & Coloboma Support), who support children born with underdeveloped eyes or no eyes at all. That’s obviously a great cause, so I’m happy to give them a shoutout. If you can sponsor Emma for the marathon, or go out and support her in person (runner number 42468) on what looks set to be a very hot day, please do so, she’ll really appreciate it. And good luck to everyone else running in the marathon too!

But I digress. Motown is a fantastic musical, and we all came away with plenty of songs stuck in our heads afterwards. Everyone in the group really enjoyed it. It flows very nicely, it’s packed with great songs, it looks amazing, and it’s really uplifting and fun. If it doesn’t get you smiling and/or tapping your feet along to the songs, then there’s something wrong with you. So it’s definitely worth going to, it’s a lot of fun!

2 thoughts on “Motown The Musical”