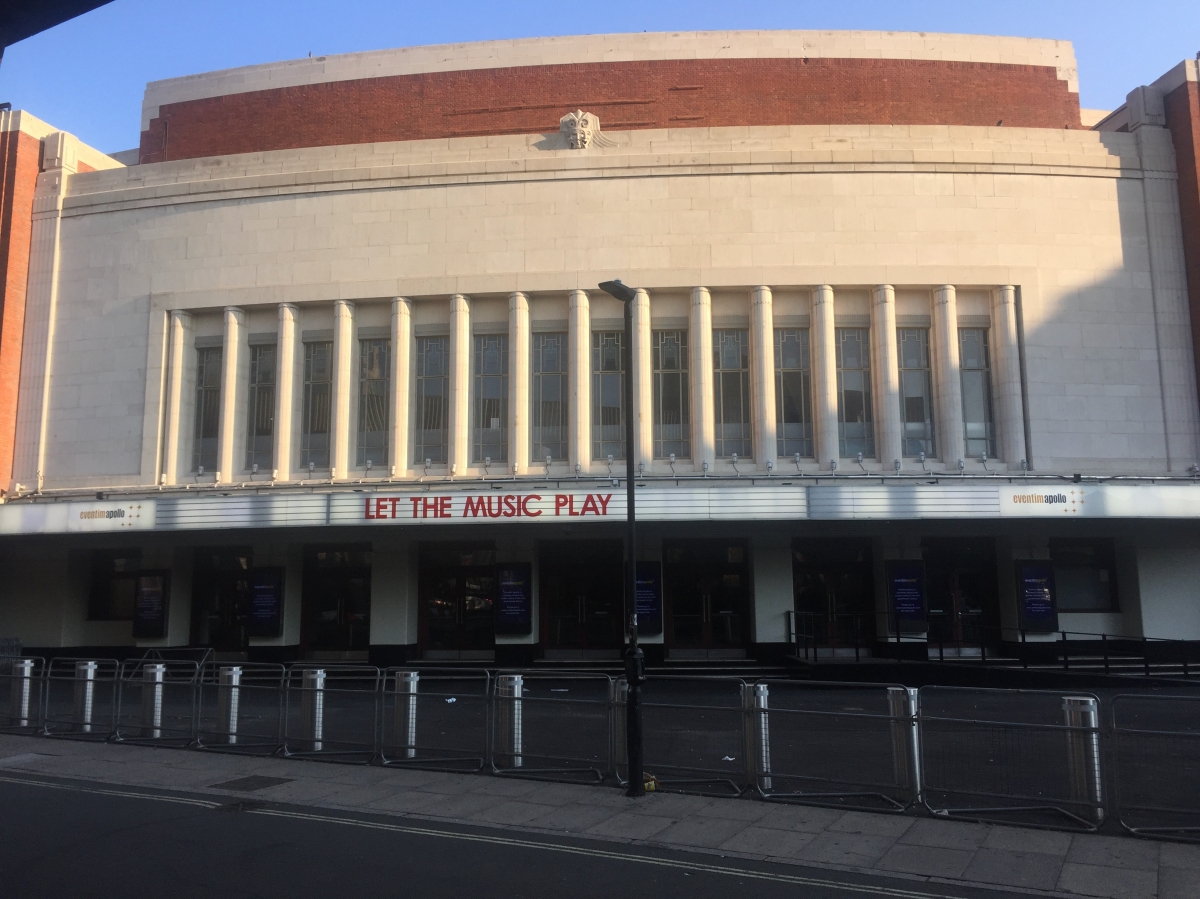 Back in September I spent a day walking around some of the Queen-related locations in Hammersmith & Kensington, following the Day 1 itinerary on the Queen Locations website. And my intention was to find most of the locations listed on that site over a series of walks – i.e. those that still exist that I can get to reasonably easily. However, due to the weather and the toughening up of Covid restrictions, I haven’t yet had a safe chance to go hunting for any more.

So this is Part 1 of what will be a very sporadic series, looking at some of the key places where the band lived, recorded and performed. As I don’t yet know when I will be venturing back into Central London, I wanted to share some of the photos I’ve taken so far as a Christmas bonus, rather than waiting until I’d completed my explorations.

Thank you to Judit Castellà for creating the Queen Locations site, which inspired me to do this and made it very easy for me to track down these places. Check out their site for additional notes and photos, and also their Queen Online article about how the site came together. As well as their Day 1 itinerary, further notes and photos about these locations can be found on Queen Concerts, Mercury Paradise and the map on Shane’s Queen Site.

So let’s get on with it, and I hope you enjoy walking in Queen’s footsteps with me!

From 1953 to 1991, this was the BBC Television Theatre where Top Of The Pops was recorded. Queen’s first appearance on the show, performing Killer Queen, is said to have been recorded here – although the Queen Concerts site indicates that it may actually have been recorded 200 metres away in Lime Grove. But either way it’s still an important location, and Queen no doubt played here sometimes. Roger Taylor has also performed here with The Cross and The SAS Band as part of his solo career. 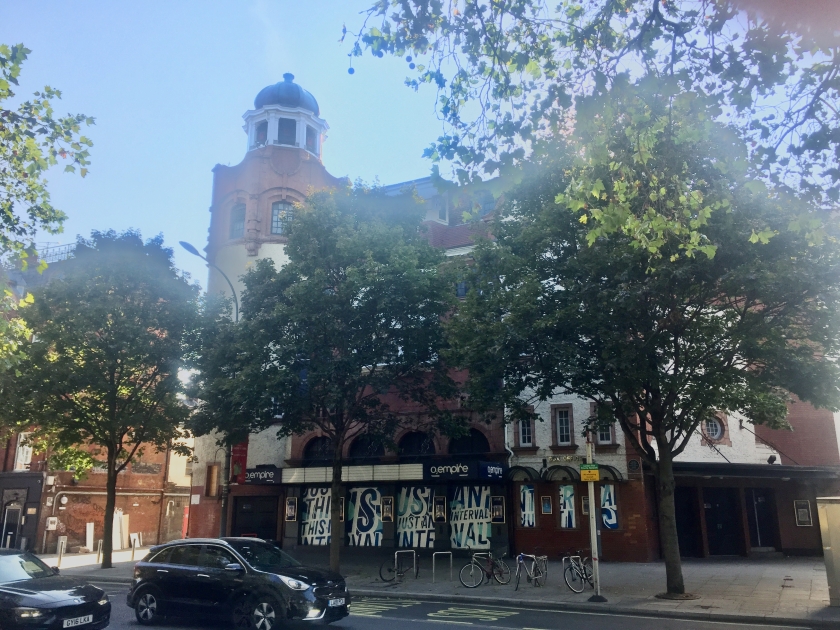 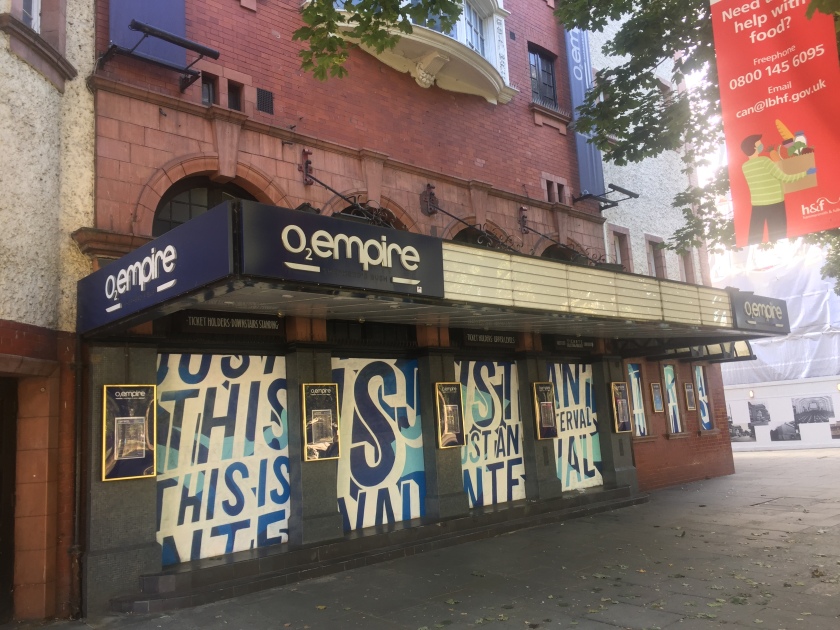 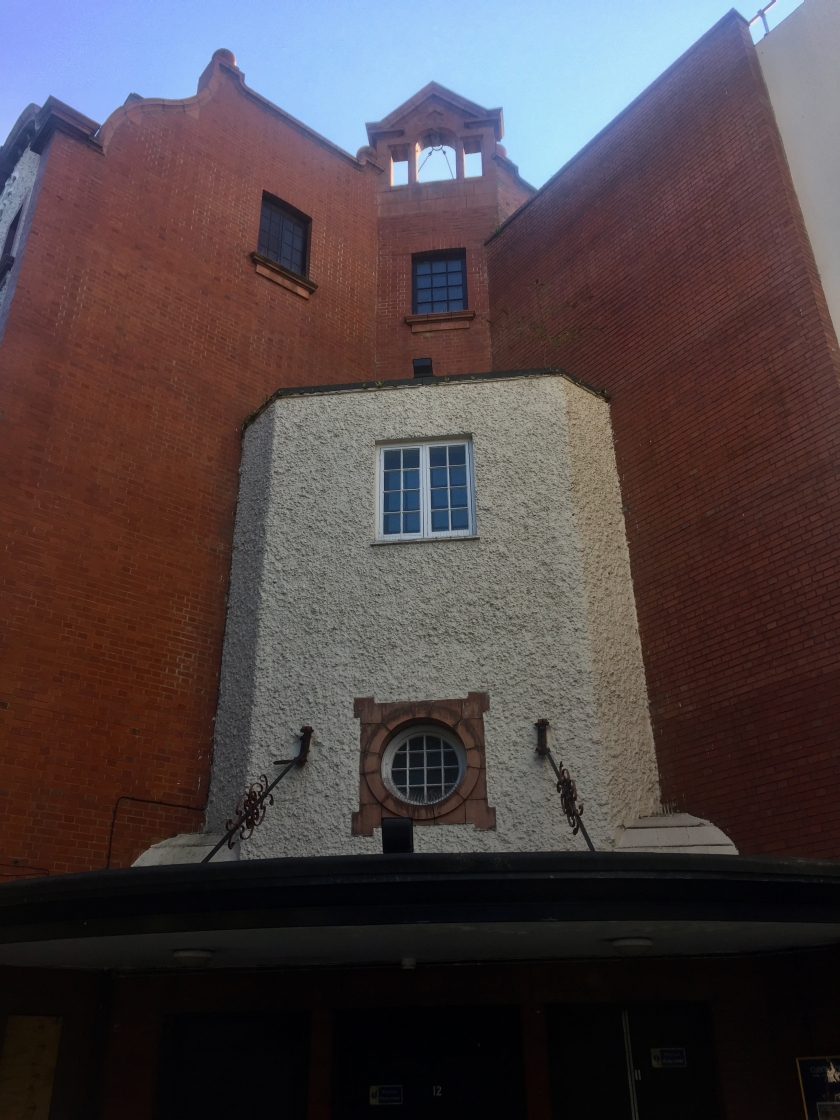 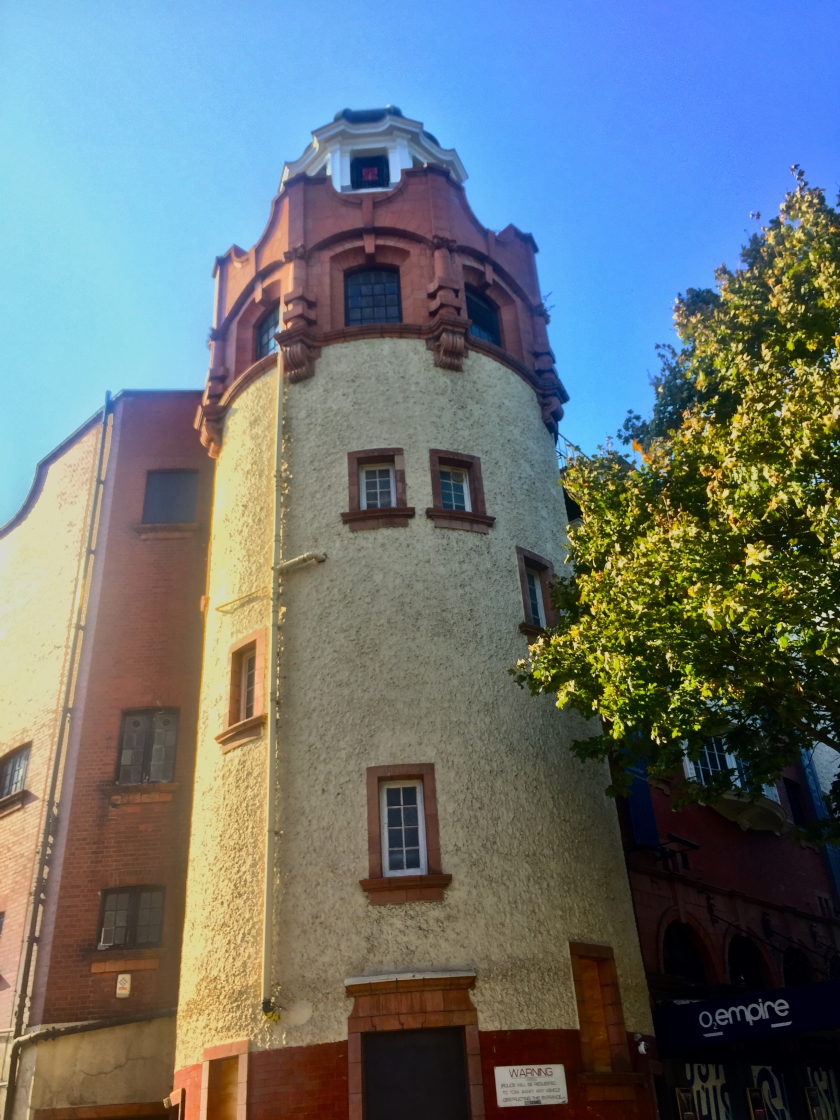 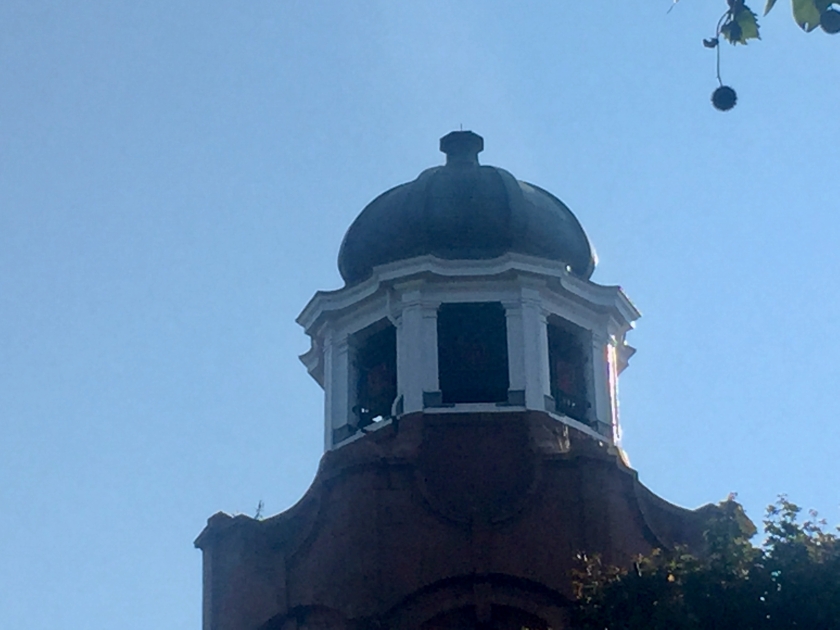 The band shared a flat here in the early 1970s. 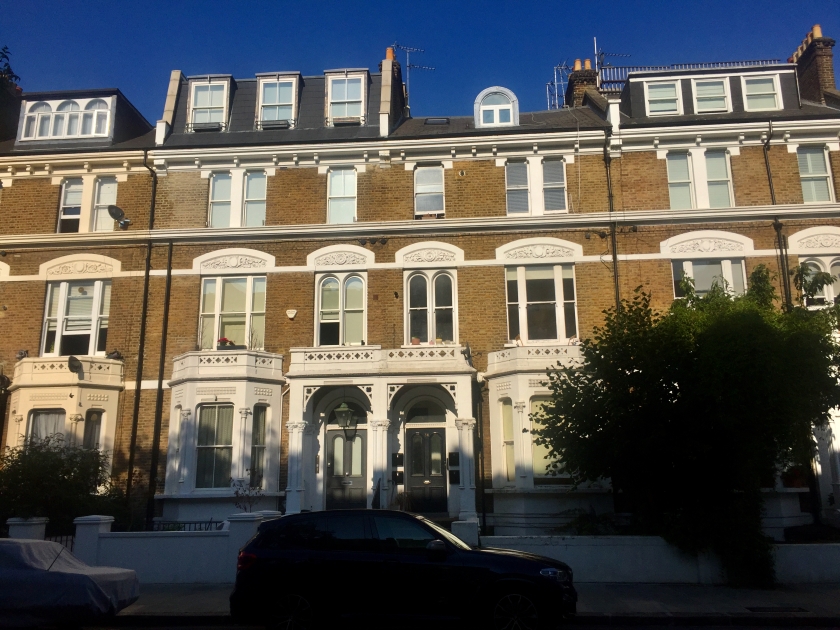 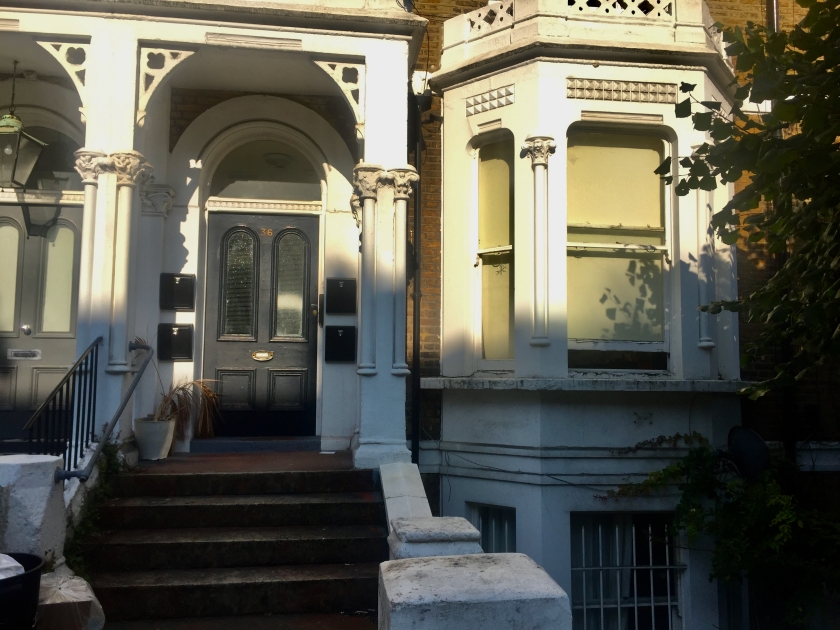 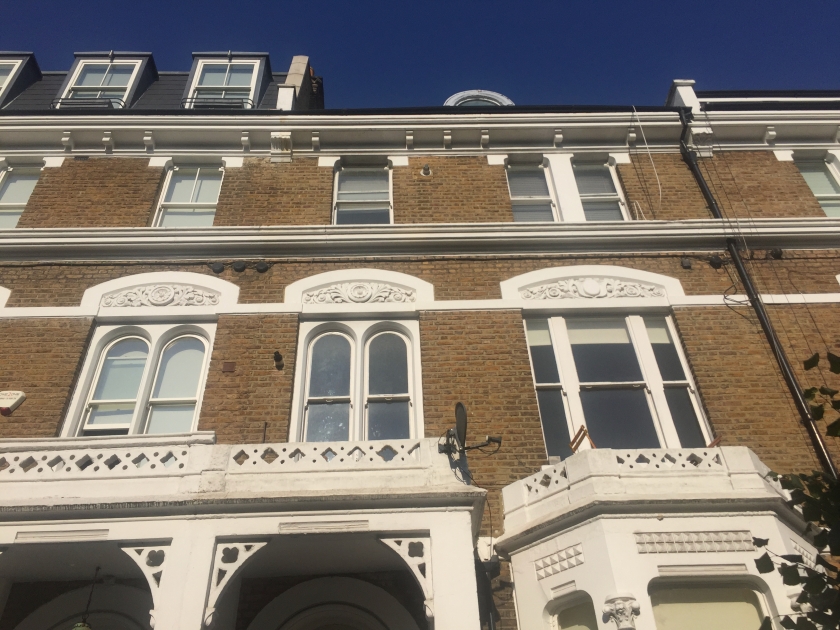 Freddie and Mary Austin lived here during the early 70s. The band’s first photo shoot also took place here, with many of the pictures by Doug Puddifoot appearing on the back of their first album. 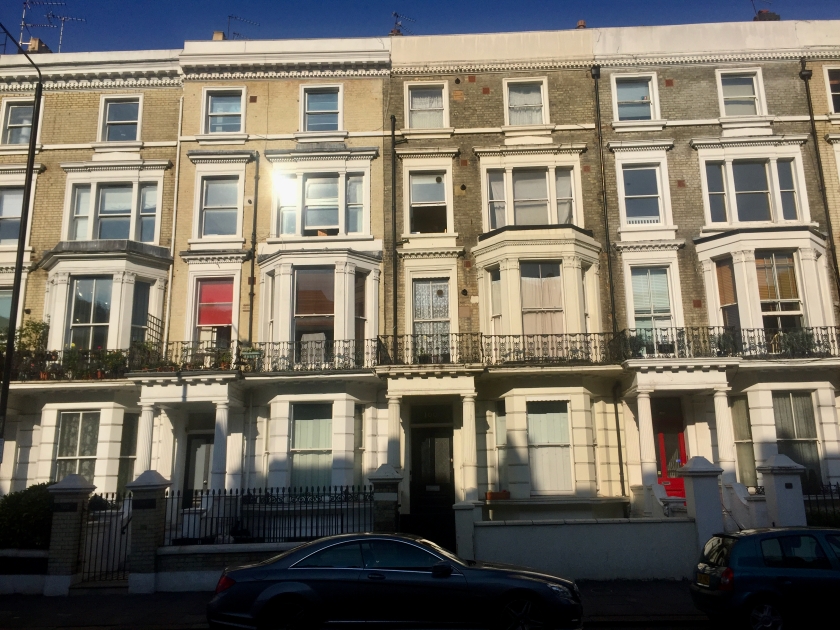 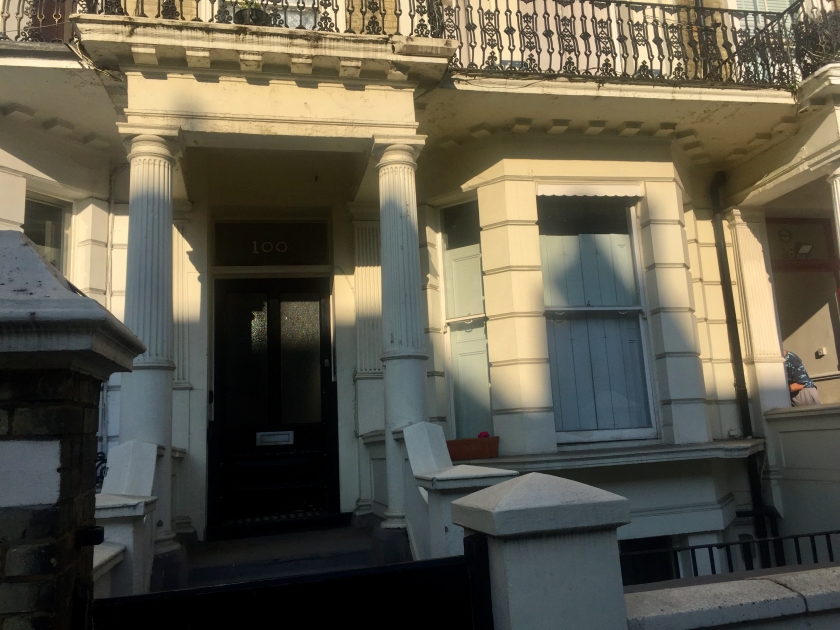 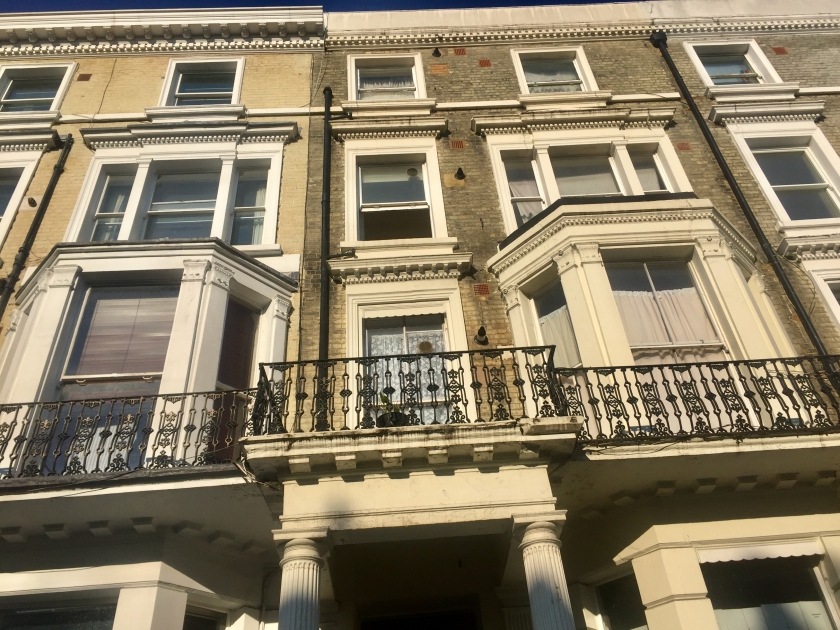 This is the former location of The Kensington Pub where Freddie, Brian, Roger and Mary would socialise, as would the band’s sound engineer from the early days, John Harris. It wasn’t the first time they’d all met by any means, but when they lived locally it was a good place for them to get together.

Old photos of the pub can be seen on Queen Concerts (reproduced below) and Wikimedia Commons, and there will be many others online of course.

However, the pub closed in mid-2011, and was demolished in 2014. This is indicated in the Viability Report, where you can see images of the building’s destruction on page 9. The framework of the new building started to appear in 2018, and the scaffolding is still covering it on Google’s Street View image from July 2019, which appears to be their most recent pass of the area at the time of writing.

But that had all disappeared when I visited earlier this year, in September 2020, and the new building looks very dull and uninspiring, sadly: 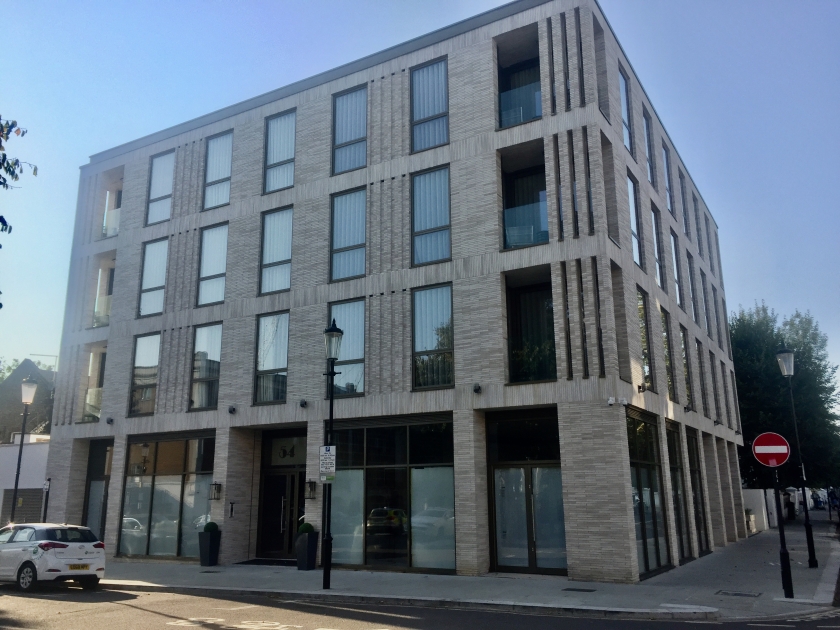 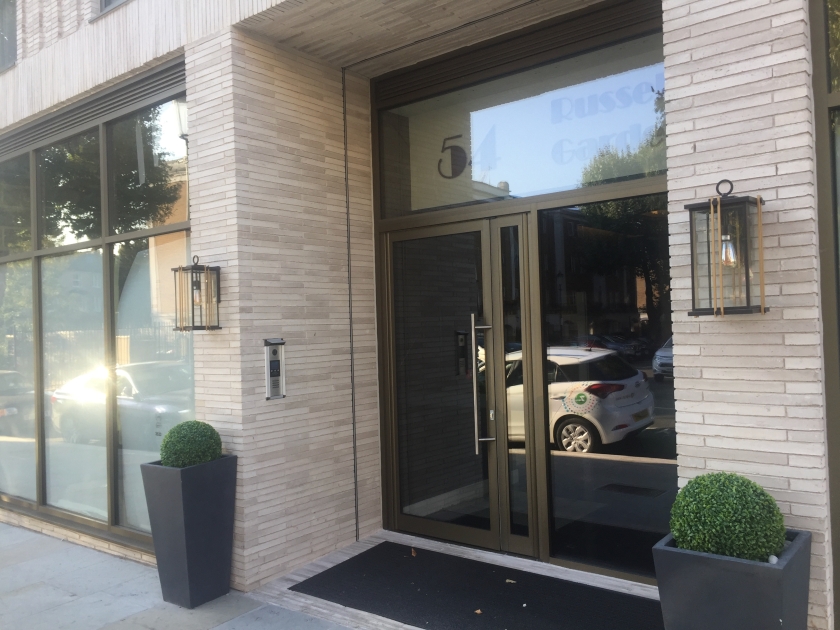 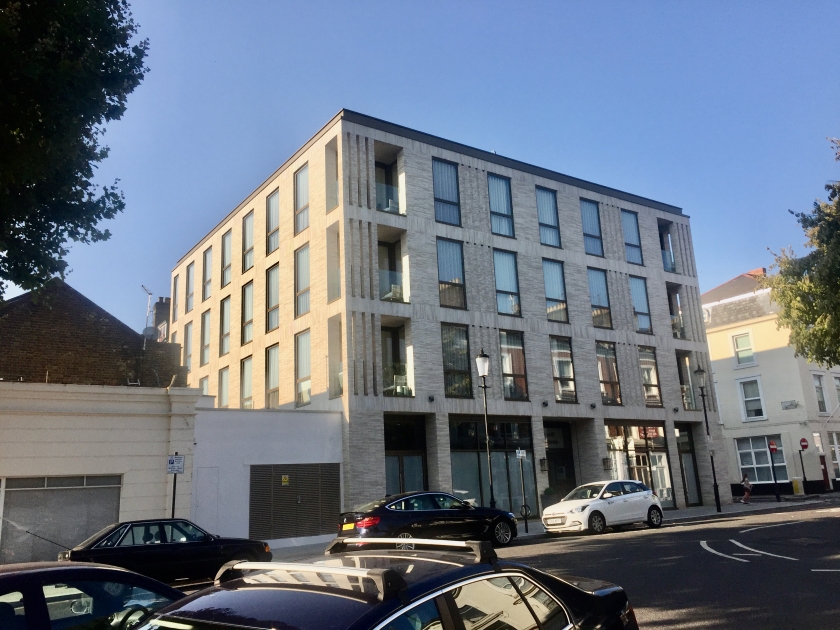 I don’t know what, if anything, the building is being used for now, but the official Planning and Design & Access statements indicate that it has a mixture of commercial and residential units.

Queen played many shows here, including their classic festive concert on Christmas Eve 1975 (broadcast live on BBC2 & BBC Radio 1, and later released on DVD & Blu-ray), and another on Boxing Day 1979 (the first of the Concerts for the People of Kampuchea). The venue has had various name changes since then, and is currently known as the Eventim Apollo. 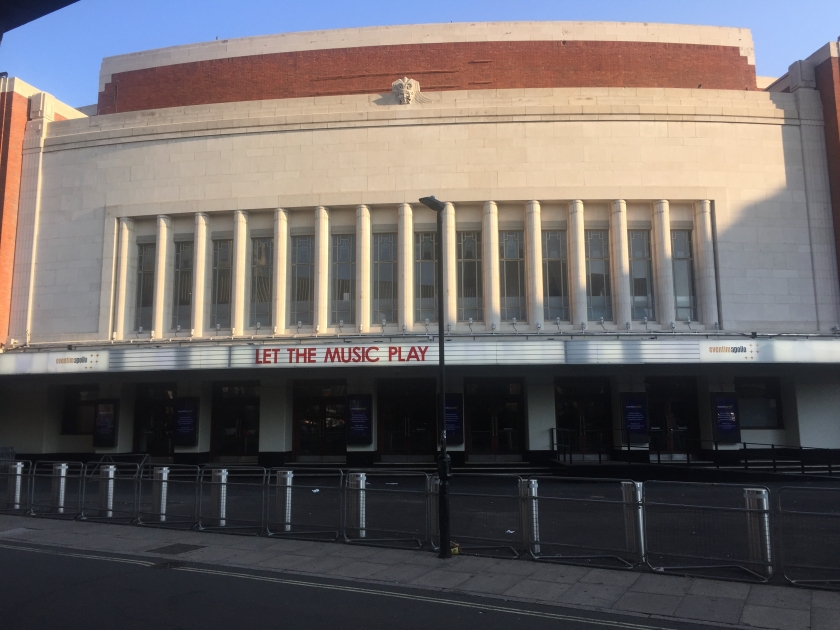 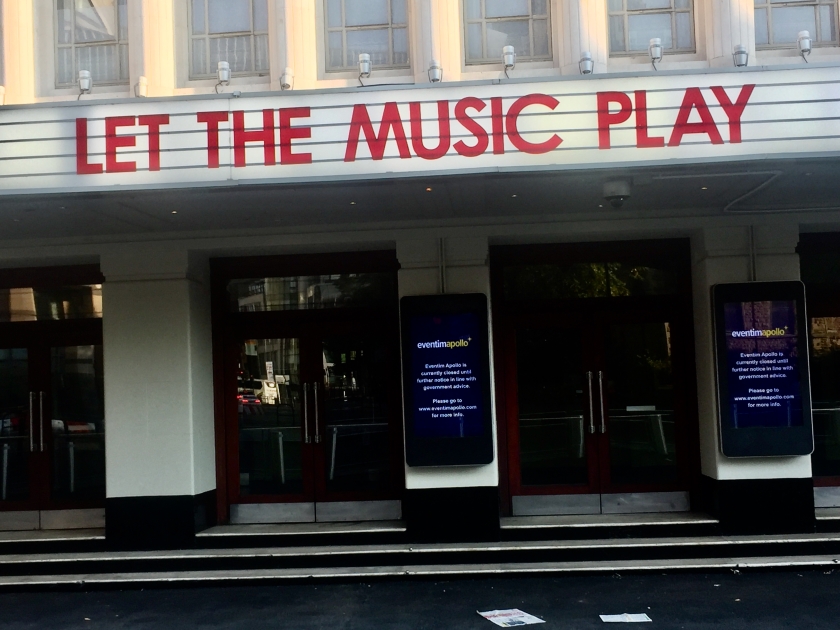 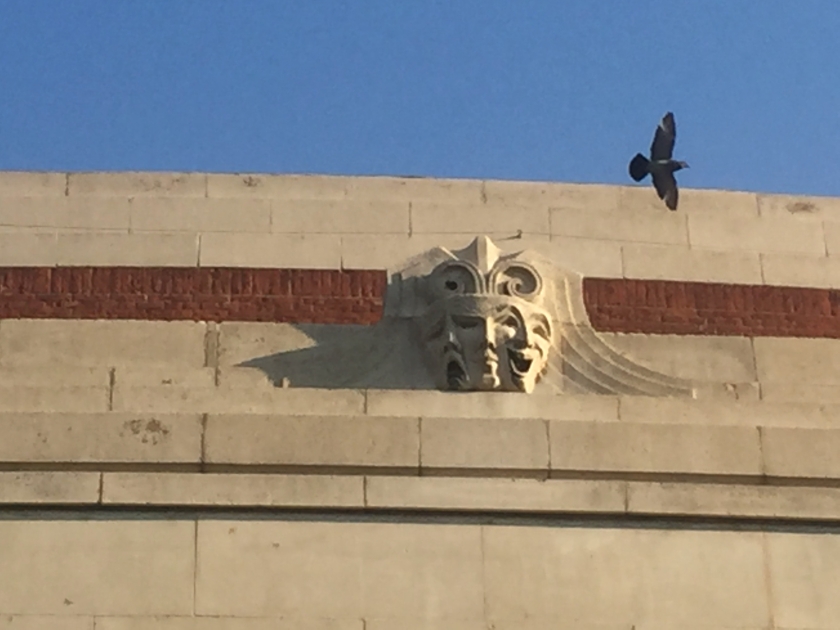 This pub near Hammersmith Bridge was a location in the Bohemian Rhapsody movie. It features in the “angry lizard” scene, where the band meet their new manager John Reid, and Freddie explains to him why they’re so unique. 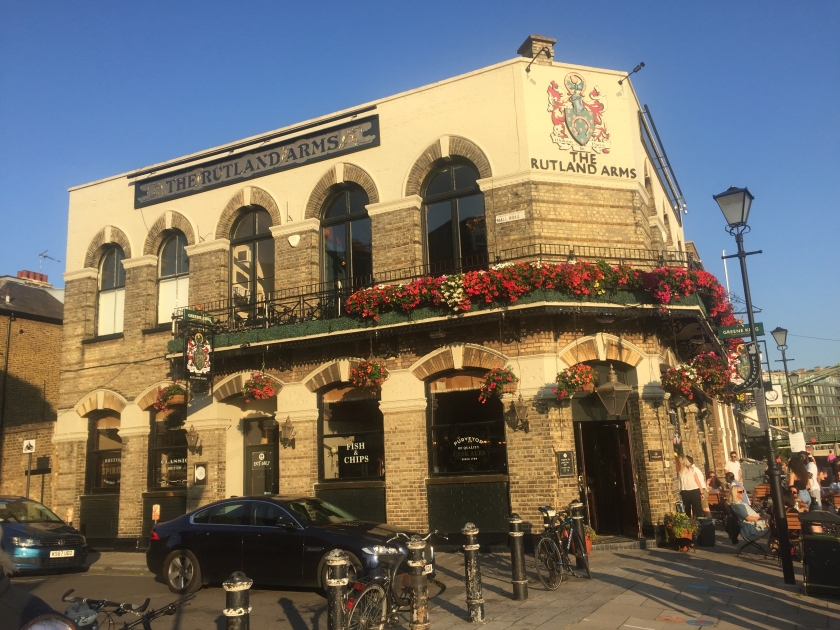 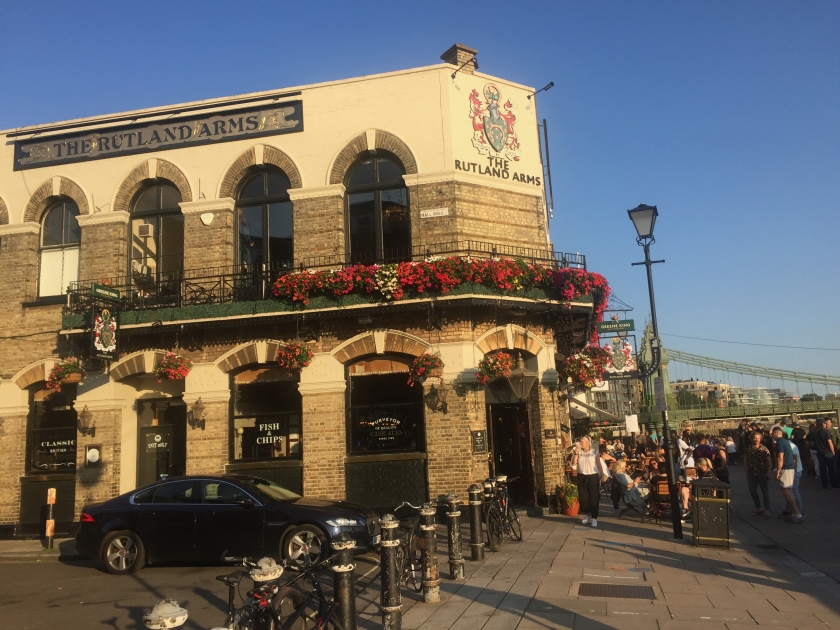 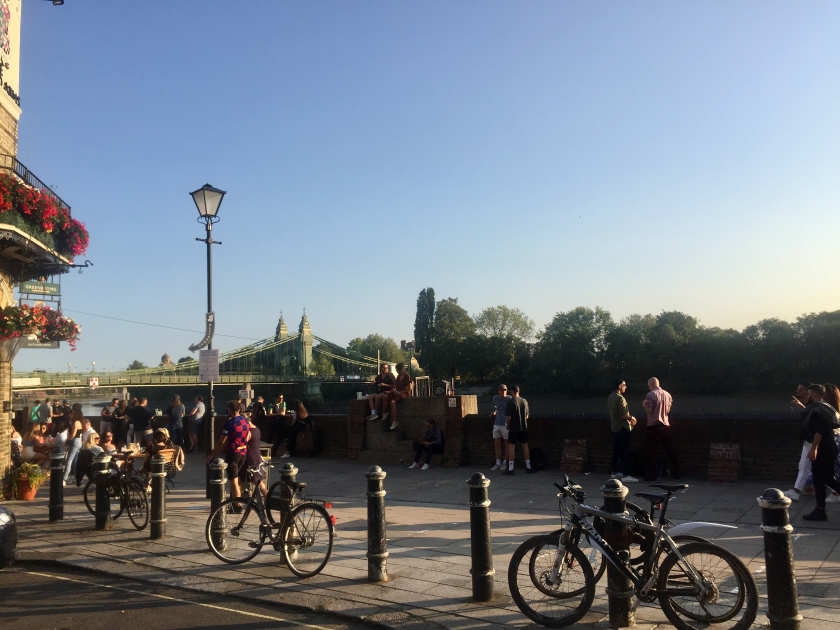 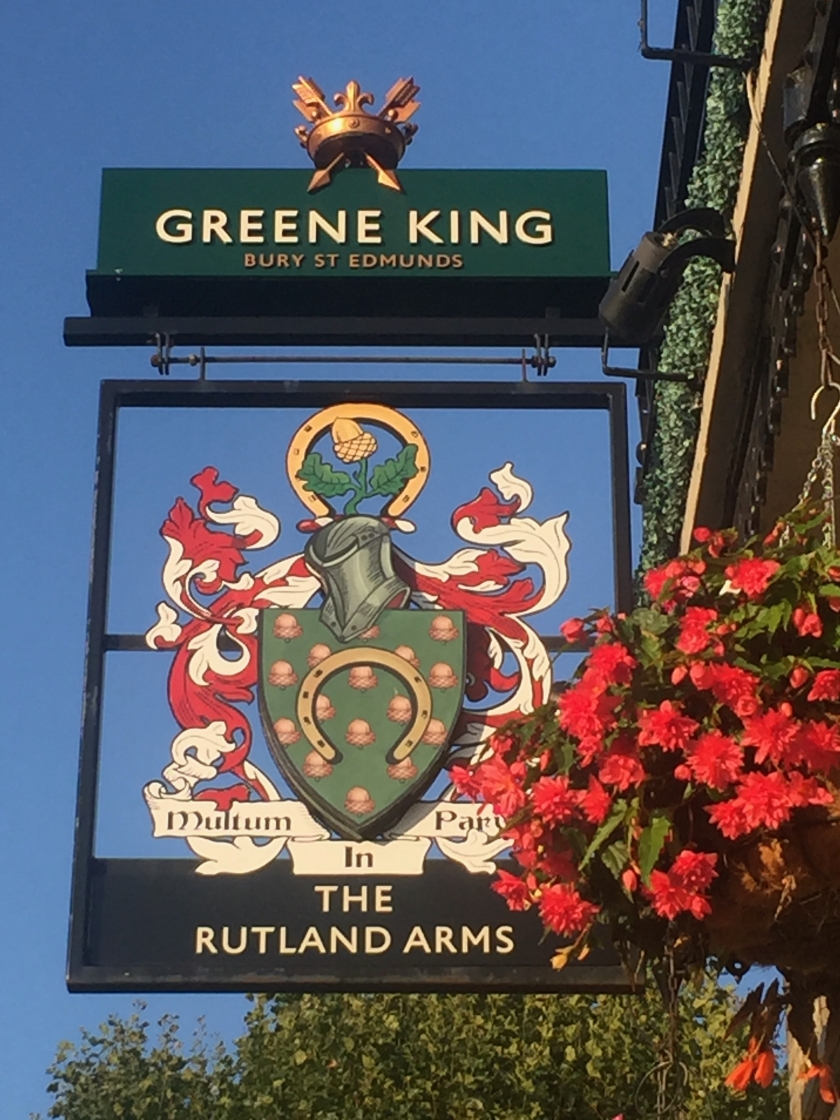 The motto there is “Multum In Parvo”, meaning “a great deal in a small space”.

So there you have it, that was my little wander through Hammersmith and Kensington a few months ago. I hope you enjoyed looking at those photos, and I look forward to sharing more with you in the year ahead, when I’m able to explore more freely again.

Mum's second vaccination: ✅
Made the most of the gorgeous #sunny weather with a lovely stroll around #WestHamPark today. Happy #Easter to everyone! 🌞🐣🌻
Had my first #CovidVaccination this morning. ✅ Very quick & easy, really friendly & helpful staff, still no side effects 2 hours later. Very relieved that I'm now protected, given that I'm a carer for my mother. Thank you so much to @NHSEngland & all the scientists for keeping us safe! 🥰🙌
What a year that was, huh? I certainly don't want 20/20 vision now if that's what I'll see! Still, while the year has thrown its challenges my way, I'm glad I've been able to navigate its stormy waters and get through it successfully. Many others haven't been so fortunate, however, and our thoughts are with all those whose lives have been turned upside down during these last 12 months for whatever reason.
Back in September I spent a day walking around some of the #Queen-related locations in #Hammersmith & #Kensington, following the Day 1 itinerary on QueenLocations.com. My intention was to find most of the locations listed on that site over a series of walks, but the weather and Covid restrictions have meant I haven't been able to explore any further yet.
#MerryChristmas to all my friends & followers! 🎅🎄 It's a strange and difficult one for us all this year, but I hope you're able to find some happiness, comfort & support, and can immerse yourself in things you enjoy. Don't forget Sarah Millican's #JoinIn community on Twitter, or the many groups on Facebook, or the various support organisations and charities out there, if you want people to talk to during the #festive season.