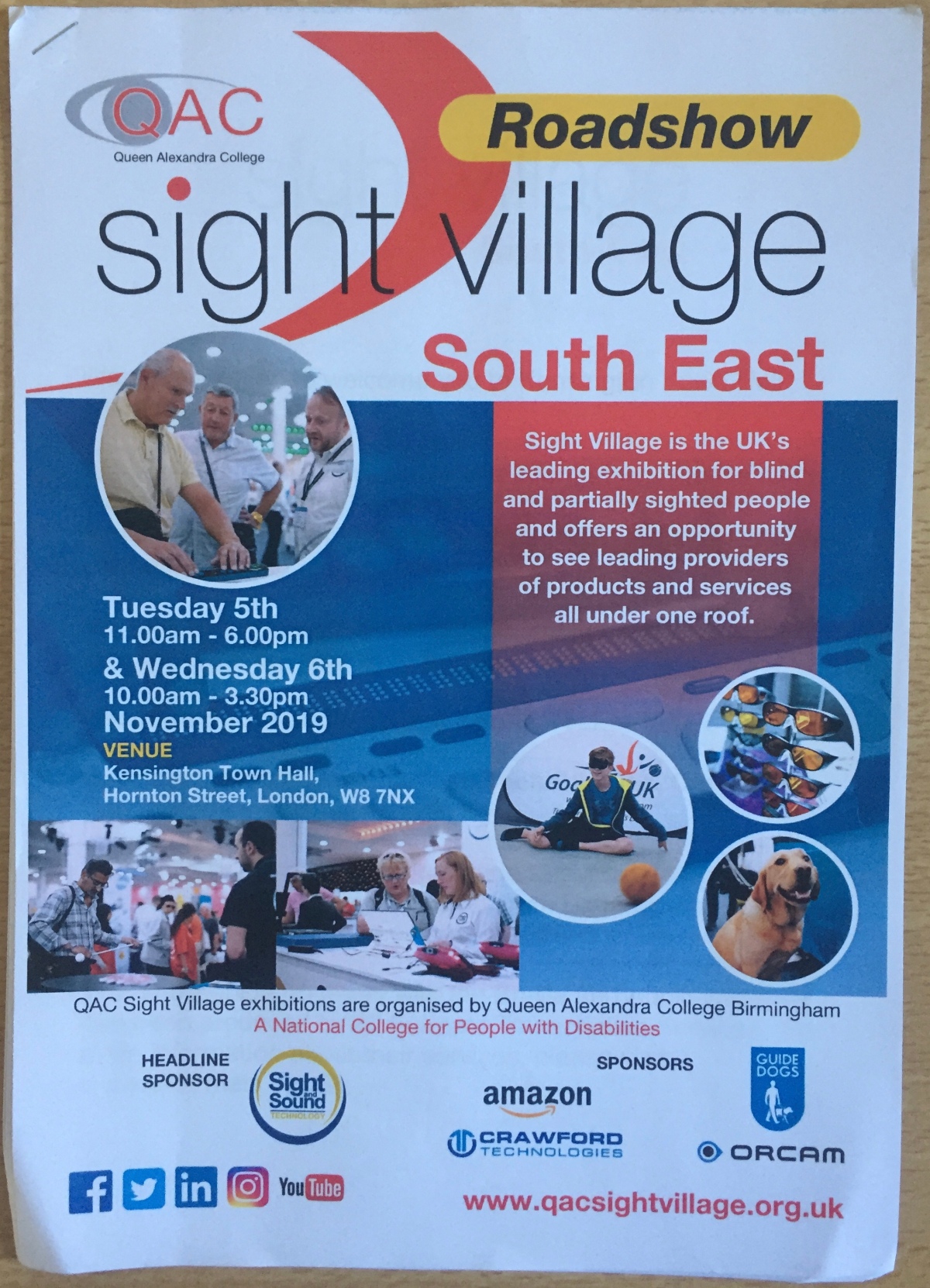 Last week I had a great time at the Sight Village South East event in Kensington Town Hall. It’s an annual exhibition showcasing the latest technology, products and services for blind and visually impaired people, and is one of a few Sight Village events held around the UK by Queen Alexandra College every year.

I’ve attended previously in 2016 & 2017, so having missed last year’s event it felt like a good idea to go back this time. But this occasion was slightly different, because although I did have a little look around, I actually spent most of the day working on one of the stands. So it was very interesting to be on the other side of the desk, as it were, talking to curious visitors rather than being one of them myself. So I just thought I’d give you a quick rundown of the day and who the exhibitors were.

I was on the VocalEyes stand, with Charlie Morris from the charity. As regular followers of my blog will know, VocalEyes provides and promotes audio description in theatres, museums, galleries, heritage sites, etc, to make arts and culture accessible for the visually impaired. About half of their events are in London, but they operate across the UK as well.

I only discovered them when moving to London nearly 3 years ago, since when I’ve been to many audio described theatre shows and museum tours, as there’s always a lot of choice for things to go to. It’s opened up a whole new world for me, enabling me to appreciate, enjoy and engage with arts and culture in a fulfilling way that I never could before.

So it was wonderful to talk to people about my experiences, particularly those who had never been aware that this type of service existed. It felt very rewarding that people were immediately interested in the idea and keen to find out more. So Charlie ended up with a lot of new additions to the mailing list. It was also lovely talking to people like myself who already knew about VocalEyes and enjoyed using audio description in the arts. It really does make a huge difference, and I for one am very grateful such a service exists. So thank you to Charlie for inviting me along, it was a great pleasure to help out.

We were right next to the stand for the WESC Foundation, who are a school and residential centre in Exeter for children and young adults who have visual impairments coupled with other disabilities and special needs. They provide the children with education, skills for work and employment, along with services for therapy, mobility and health. They also provide adult care and support services.

I was particularly happy that they were next to us, because that’s the school I used to go to! And Richard Ellis, who was running the stand by himself, is a member of staff I got on very well with. We’ve been reunited at previous Sight Village events, so it was fantastic to be able to catch-up with him again. The school’s changed a lot since I was there, as they’ve evolved quite a bit since I left, and I’m glad to see that they’re still operating and doing great work.

Congratulations also to Richard on his recent charity cycle ride over 14 days from Lands End to John O’Groats, a challenge her took on as part of his 60th year. He’s already raised an incredible £1,147 for WESC Foundation at the time of writing (which comes to over £1,400 with Gift Aid). And donations are still open as I post this, if you want to support children with visual impairments and other disabilities, Tell him I sent you if you do.

So I loved chatting to Charlie from VocalEyes and Richard from WESC Foundation throughout the day, I was in very good company. And various other people I knew also came up to the stand during the day to say hello, which was cool. So the time flew by, and thank you to everyone who approached our stand to talk to us.

I did step away from the VocalEyes stand for a little while in the early afternoon, to have a break and a little look around for myself. I started off by having lunch in the refreshments area downstairs, having a lovely bacon roll and a big chocolate croissant with lots of chocolate sauce inside, which kept me going during the afternoon nicely! The lady serving me was very helpful too, kindly reading everything out to me so I knew what they had. Indeed, all of the staff and volunteers were fantastic, not just in the food area but throughout the event. I noticed a lot of people being taken around by sighted guides during the day, which was great. So thank you to all of the staff and volunteers for their time and hard work.

After lunch, I then had a little walk around the exhibition, selecting a few stands to approach and chat to the people there, mainly at random depending on who was free at the time. Many of the others who I didn’t see are companies that I’ve already looked at when attending in previous years, or I already knew about in general anyway. I didn’t go to any of the talks, but I’ve included them in the list below so you can see what was available.

As always, there was quite a variety of exhibitors for people to check out. For my own personal needs, there wasn’t anything particularly new or special that stood out as something I might want or need. But all of the stalls were getting a steady level of interest from the busy crowd during the day as far as I could tell, and all of the products and services on offer would have been useful to some people.

So here’s a list of all the other exhibitors at the show, with a few notes here and there. Please note that mentions are not necessarily endorsements of the products and services that are being offered. I’m simply listing them because they were there. You will need to do your own research to determine if a product or service is right for you.

So there was plenty to look at there as you can see. If you’ve never been to the Sight Village exhibition before, it’s well worth popping along to see if there’s anything that grabs your interest.

It’s become traditional for members of the Aniridia Network to meet in London after the Sight Village event, as it makes sense to make the most of the day if people are going to the exhibition anyway. And this year was no exception. We had a good group of 9 people altogether, meeting at Pret for a drink before moving on to Bill’s restaurant for a nice dinner. It was a lovely chatty evening, and it’s great to have these opportunities to socialise with people who have the same condition as me.

The Aniridia Network also have another meetup this month, and this will be their first ever event in Scotland. It takes place next Tuesday, 19 November, from 3pm-9pm. Trustee Eleanor Burke will be hosting the informal get-together in the bistro of the Best Western Kings Manor Hotel, which is a a 13 minute train (or 33 minute bus) ride from Edinburgh Waverly station. So if you’re in that part of the country, do check it out. Or if you know someone who might be interested in going, do let them know. Patients, parents, children and professionals who have experience with aniridia are all invited.

Altogether it was a long and busy day, but a very productive and enjoyable one. It was great to be able to promote VocalEyes after everything I’ve gained from using their services, wonderful to chat to a good friend from WESC Foundation throughout the day, interesting to explore the exhibition, and fun to relax afterwards with my friends from the Aniridia Network. So it was well worth going along!

Can I Play That?