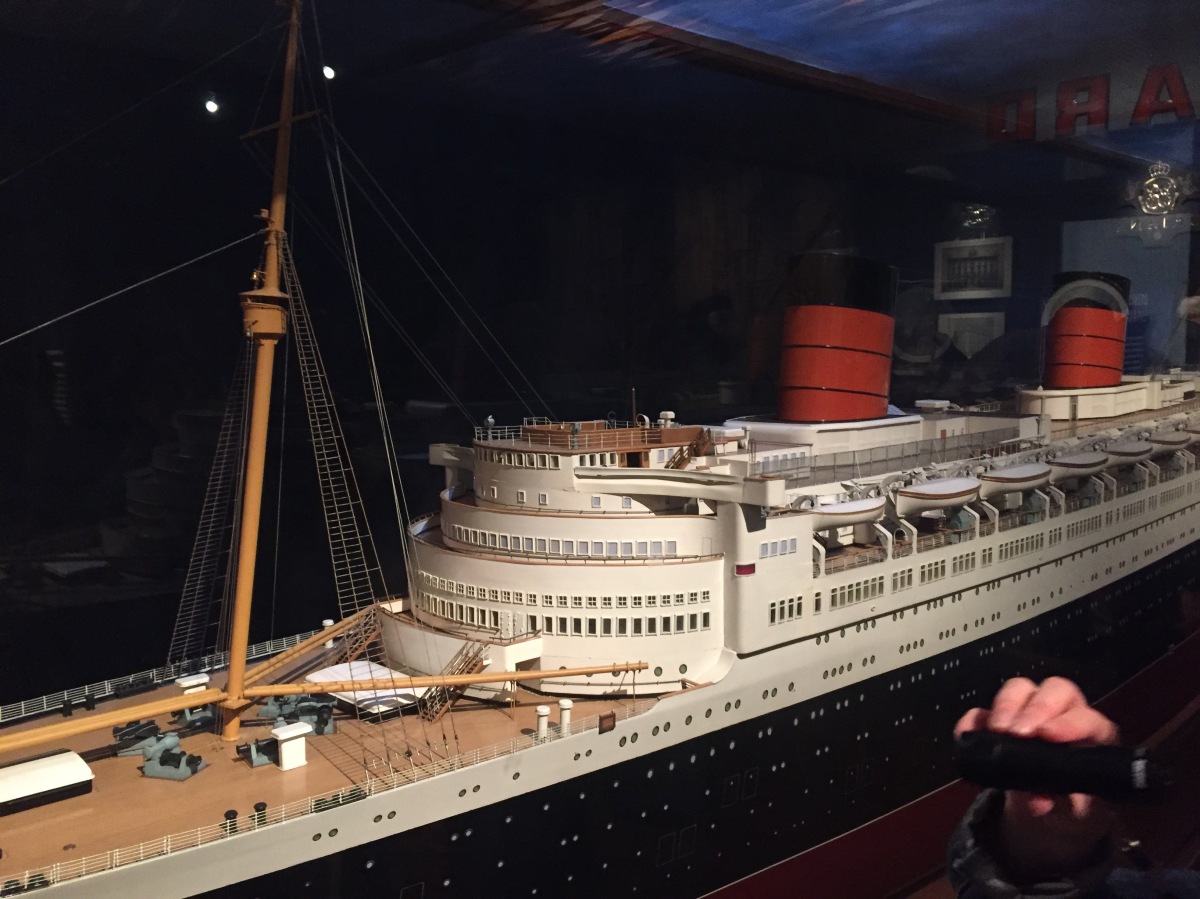 I’d love to go on a cruise one day, it’s one of those bucket list items for me. I know a few friends who have done it and enjoyed it, and I love the idea of relaxing in a massive floating hotel… well, they can be entire floating cities in effect… with all the entertainment on board, and visiting a variety of interesting places. One day it’ll happen I’m sure.

But I got a nice taste for it on Saturday, and in particular learned about a lot of the history of it, with the Victoria & Albert Museum’s exhibition Ocean Liners – Speed & Style. This was the last weekend of the exhibition, so I just got around to seeing it before it closed. And I made a new friend in the process. So it was a lovely day, and I thought I’d tell you a bit about it.

I met up with a wonderful lady called Claire – hi Claire! 🙂 – who had contacted me about my blog and we’d exchanged a few emails as a result. I know, I get fan mail now, who’d have thought? I feel like a minor celebrity!

So we decided to meet up and go to the V&A together. And we had a typical VI moment on the Tube on the way there. We had been so busy chatting that we missed the audio announcements (which were already a bit drowned out by other passengers and the train noise anyway I think), and so weren’t entirely sure which station we’d got to. We couldn’t read the name through the window, as it was too distant, and there wasn’t time to fish out my monocular or ask someone, because the doors were due to close any second. So we took our chances and hopped off – only to find that we were one stop too early. Which is better than going past it, to be fair. And the next train came very quickly, so we just hopped on that for one more stop.

Once we’d correctly got off at South Kensington, we walked up to the V&A Museum, where we had a lovely chat over lunch in the garden café area, having a baguette and a muffin each in the warm sunshine. Then we walked to the exhibition, for which we had to ask someone for directions because there were no clear signposts or maps to it that we could see. I had downloaded the V&A’s map from the website on to my phone and checked it in advance, so we had been heading roughly in the right direction, but we needed the final directions to get us to the door, and we hadn’t been far off.

The first thing we noticed was how dark it was in there. The exhibits are lit up, of course, so we could look at those. But with dark flooring and low lighting in some of the walking areas, it did take a few moments to adjust, and we had to take care walking through sometimes. Claire and I nearly lost each other once or twice as well.

A couple of rooms also had big mirrored walls, to give a sense of scale by visually doubling the size of the space, which is indeed very effective. But that wasn’t immediately obvious to me. To start with I literally thought we had entered a very big room, and it was only as I got closer to the wall, wondering if I should turn to the left or right to look at things first, that I noticed my reflection! So in that sense it wasn’t always ideal for visually impaired people. Not impossible to get around, we managed alright, but you do have to concentrate and be a bit careful sometimes.

And talking of accessibility, they had been offering audio described tours of the exhibition, which we would gladly have done. But, as is common for many museums, they were in the middle of the week when we’re at work. And, while I do go on such tours mid-week now and again, I do have to be very selective of the time I can take off, as does Claire. So that wasn’t an option here. But I’m sure it would have been very interesting if we’d been able to do it.

But they did have large print guides, which was great, once I’d found them in the dark entrance area at elast. The guy at the front desk did point towards them and say roughly where they were, but as many VI people will testify, the whole “over there” thing means very little. A member of the public picked one up for me though, which was nice of them.

And that guide did come in very useful at many points during the exhibition, so I was able to read the text of the wall panels and exhibit labels as we went along. There was enough light to read under when I stood near to the exhibits, which was good. But there were also occasions where I couldn’t find the relevant text in the book easily – contents pages for different sections of large print guides would be useful sometimes – and one or two instances where the label text appeared to be presented in reverse order to the way they were in the exhibition space. So it wasn’t perfect, but it did help a good deal of the time, so I’m very glad I picked one up. I wouldn’t have read so much without it.

In other cases, I was generally able to get up close to wall panels, or use my monocular (my little telescope) to read things, whatever felt most convenient at any given moment. So I was still able to read things then. There were just a few exceptions where even that wasn’t possible, because the object labels were too small and far away and the lighting too dim to make them out. But I don’t think we missed anything major. We weren’t trying to read every single label anyway, that’s just not practical. 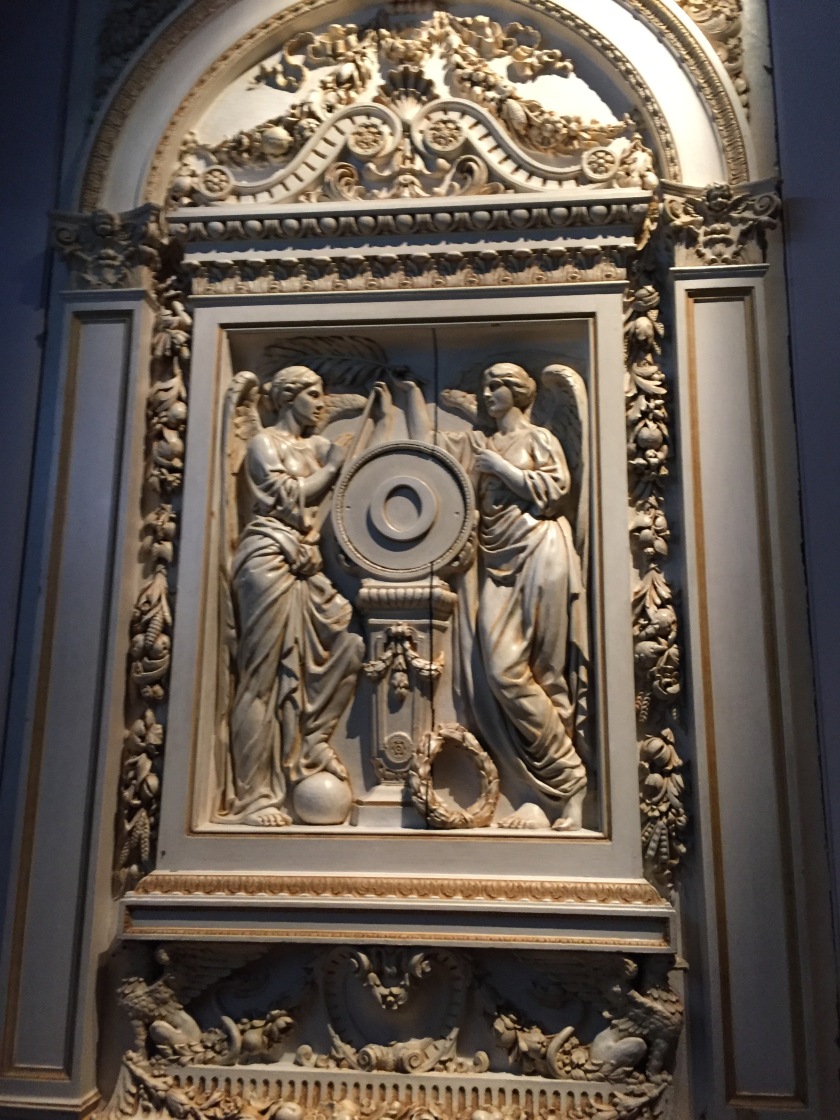 So overall we were able to take in a lot of the information, which was worth it because it was very interesting. The exhibition explored the history of ocean liners, including their construction and engineering, the ornate decorations and furniture, the fashions worn by those on board (especially in first class), the activities that were offered, the promotional posters and literature, the evolution of the liners over time, etc. There was a certainly lot to see there. It was more extensive and comprehensive than we had perhaps expected it to be. So we spent a good 2½ hours exploring.

The models were particularly impressive, including a huge one of the Queen Elizabeth liner in the first room. Height-wise it wasn’t particularly tall perhaps (although it was still sizeable and the mast went up quite high), but in terms of length it was massive! It’s mind-boggling to think just how gigantic the ship would be when scaled up to its full size. Same goes for all the models we saw for that matter.

The attention to detail it had was also incredible, and the same goes for all of the models in fact. All the little portholes and windows, all the bits of machinery, all the lifeboats, all the railings, all the seating, etc, it was all there, all faithfully reproduced in miniature size. Big credit to the model-makers who built those, they’re amazing.

It was fascinating for Claire and I to look through our monoculars at it all, discussing the details we were each noticing. We were a bit like sailors ourselves in that sense, looking at ships through our little telescopes! Our varying levels of eyesights actually complemented each other quite well, it must be said – it was easier for me to read the information, for instance, while Claire was able to point me to interesting details in the exhibits that she’d noticed.

Seeing what the liners looked like on the inside was also very impressive, with the artistic murals and other wall decorations, plenty of comfy chairs and nice tables, deckchairs for laying back and relaxing in, etc. They also had a chair from the Titanic in the exhibition, which was an interesting piece of history. And then you had the fashions, with smart suits and beautiful dresses, which were great to look at.

There were lots of pictures too, including some useful photos in the large print guide, showing how the interiors would have looked when using items that were in the exhibition. The promotional leaflets and posters from the time also gave a good sense of what the ships were like both inside and out. 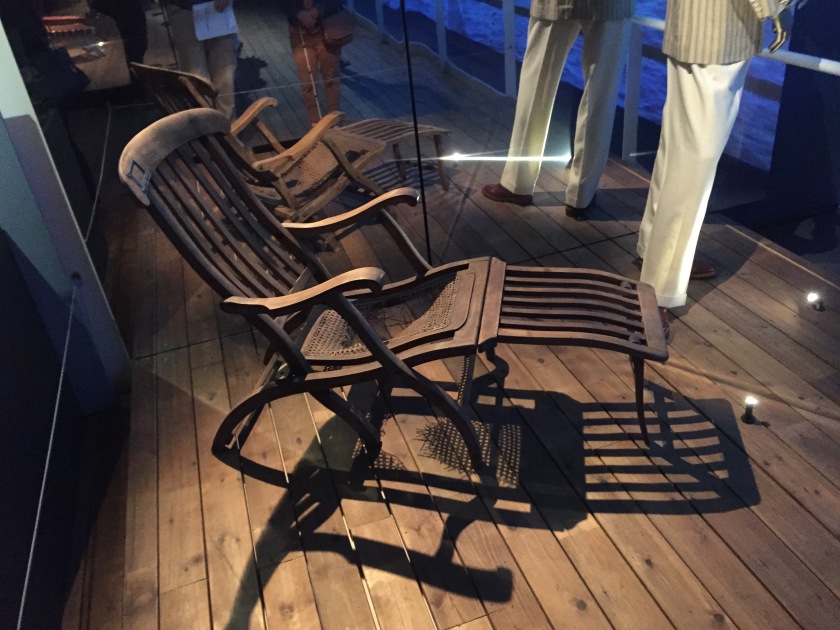 And there was some video footage we could watch as well, of people enjoying their time on the ships. There was no commentary with them, but they were interesting to watch, giving an insight into what life on the liners was like. So there were clips of people socialising, eating, drinking, ballroom dancing, and playing all manner of sports like swimming, tennis, boxing, fencing, etc.

One screen also showed ladies descending a staircase in their designer dresses, just as they used to do when entering the first class dining areas. And one video even showed Hitler on a cruise ship built by the Nazis. And towards the end, a wall of one room was completely taken up by a large screen showing the sea, and a huge cruise liner sailing across it, which helped to give a sense of scale, as if you were on a nearby liner yourself. 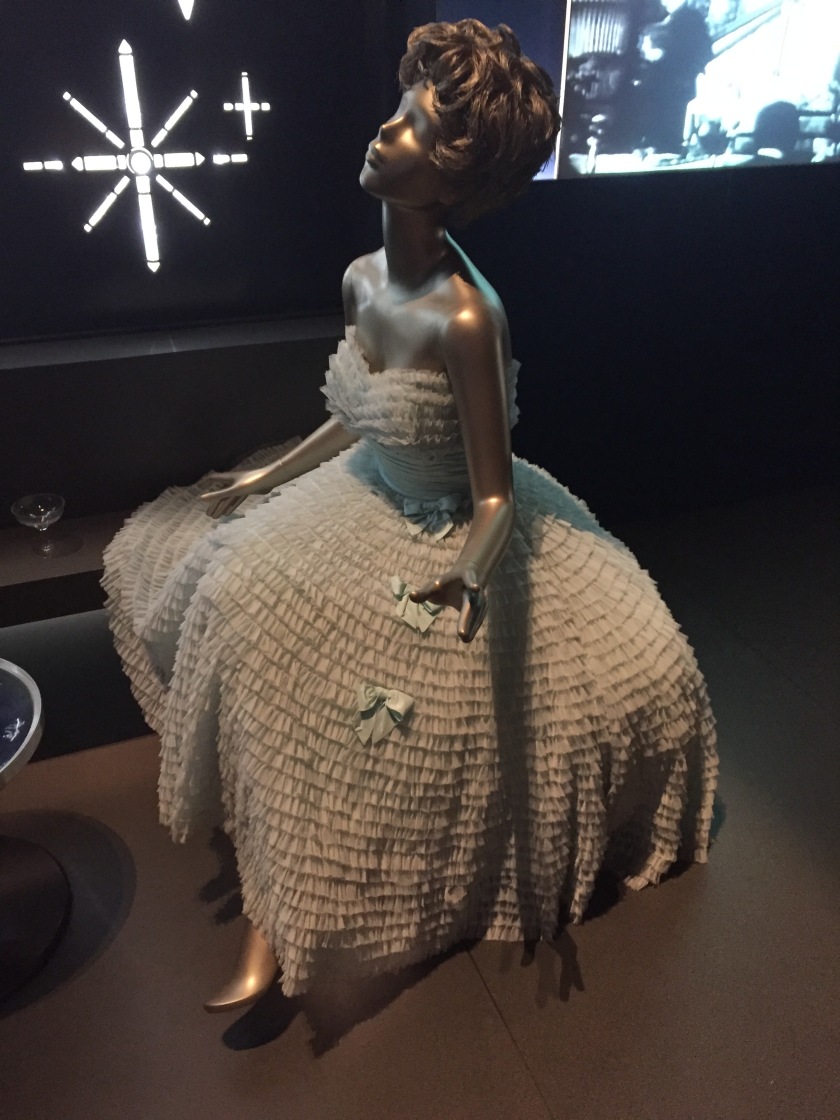 So it was a very enjoyable and interesting exhibition, and we were glad we made the time to book up and explore it. wW finished our day with a hot chocolate and a slice of Millionaire Shortbread, this time at the museum’s indoor café. That’s quite a bit of chocolate to have in one go, sure, but we’d earned the treat and it was nice.

There are other exhibitions coming up at the V&A that look interesting too, including The Future Starts Here (which is already open and closes in November), and Videogames: Design/Play/Disrupt (opening in September). So I want to see those, on top of all the other exhibitions that I’ve yet to explore there too. I don’t think I’ll ever see everything in the V&A, it goes on forever! But that just gives me plenty of excuses to keep going back there at regular intervals, it’s a great place.

It was lovely to meet Claire as well, and we already have our second outing planned, which looks set to be very entertaining. It should certainly be interesting to blog about given the subject matter, but I won’t say any more than that. In the meantime, it’s been nice to make a new friendship over some cruise ships!

3 thoughts on “Whose Liner Is It Anyway?”