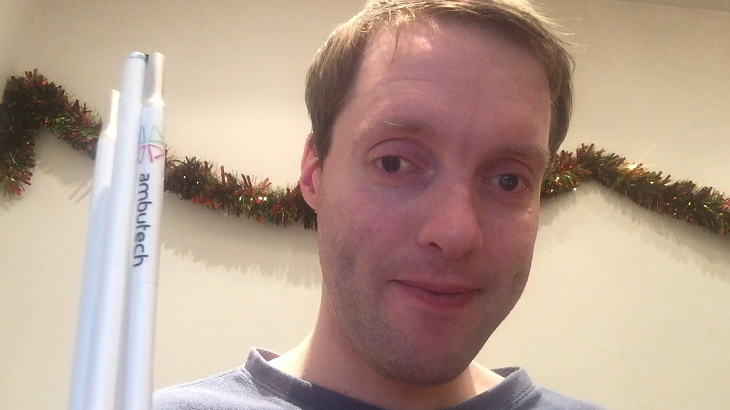 As part of their #HowISee campaign (which I did a post about a little while back), the RNIB are currently engaging the visually impaired community in a discussion as to whether you should customise your white symbol cane or long cane. They’ve asked me to give my thoughts on the subject, so that’s what I’m going to briefly do in this post and video.

Before I touch on that, I just wanted to explain that I don’t use a cane myself on a regular basis. And I don’t have a guide dog. I can usually get around just by using things like my sunglasses to reduce glare, my monocular to read things, and the magnifier and other apps on my phone to help when need be.

Some people have said that perhaps I ought to use a cane more, particularly at night. And that’s a fair point, maybe I should. And occasionally I’ll carry it if I feel I can’t rely on my eyes well enough, as I do have bad days now and again. But on the whole I feel able to manage without one, because there are other tricks that I use to get around safely. Mainly I will stick to well lit areas where at all possible, of which there are generally plenty here in London. Not everywhere, but usually it’s quite easy to stick to main roads the vast majority of the time.

If I am walking down less well-lit streets, then chances are I’m probably with someone and being guided by them if need be. Because otherwise, if I was on my own, I would avoid it if there was a more well lit route. Even if it’s a slightly longer route, within reason of course, then I’ll go that way, because I’d rather be safe than speedy in getting somewhere. If I really, really have to go down a dark street, then I can use the torch on my phone if need be, but I’ve never come across that scenario as yet. And in that situation I would certainly be more likely to use my cane as well.

I will also tail other people when I’m on my own, without them realising it. Not stalking, but I will pick a stranger who’s walking down the street in the same direction as me, and copy where they go, so I can tell if they’re avoiding obstacles, puddles, etc. It’s a useful trick that I do on autopilot, and I know there are others who do it too.

So I’ve never felt compelled to use a cane regularly, as I have other ways of navigating. Maybe one day in the future it will get to a point where I have to, if my sight gets worse to the point that it’s necessary. There’s no reason to think that it will at the moment, but you never know what the future may hold. So if it did get to a point where I needed to use a symbol cane or a long cane, or even a guide dog, on a regular basis, then I would certainly consider it. But at the moment, I feel I can see well enough not to need a cane in most situations.

The symbol cane I have was given to me by the local social services when I moved to London. It’s a short 85cm symbol cane, described on the label as a “slimline folding identification cane, aluminium black tip.” As the words “identification cane” suggests, it basically says to other people “I am visually impaired, I want you to know that and be aware of that.” But I don’t feel a huge desire to show my disability like that. I’m happy going round without people knowing, because I like being independent as much as I can, while I’m able to do so. I’ll only let people know when I need them to know, if I need some help or something like that. I’m happy and comfortable doing things that way.

In terms of the debate as to whether to customise a cane or not, certainly the impression I get is that it’s very much a case of personal preference.

I think if you’re out there using a long cane, scraping it along the ground, it’s pretty obvious that you’re using it to guide yourself in some way. Maybe it’s not, but to me, that’s how I would interpret it. Because you wouldn’t just use a cane like that for no good reason. Likewise if you’re carrying a symbol cane in front of you. I think that your mannerisms and the way you’re walking, given that you are holding a cane like that, should make it fairly obvious that you’re using it for a reason. Nobody just waves a stick around in front of them randomly like that. Not that I’m aware of anyway. So, even if they don’t know your exact condition, members of the public should for the most part be able to realise that you need the cane, or you wouldn’t be using it in the way that you are.

Maybe I’m wrong, maybe the wider public are dimmer than I give them credit for, and maybe it’s because I’m on the inside looking out, as it were, as a visually impaired person not understanding what it’s like to be sighted. But it just seems like common sense to me – I don’t know exactly what condition that person with a cane has, but evidently they need to use it.

As for customising the cane, I think it’s absolutely fine. If you want to customise your cane to suit your personality, and make it look a bit less medical or formal or whatever, then by all means do that. I don’t think it’s going to cause a major problem generally.

I think the main thing to seriously consider is safety, especially at night. If you’re using a customised cane that’s now really dark in colour, then it’s not going to show up so well in the dark. So you either need to put some reflective or bright banding or colouring on it, or perhaps have a separate cane for night time use that is white or bright or reflective in some way.

So as long as you’ve got the safety aspect in mind, then you can do as you wish as far as I’m concerned. I think it’s great that people want to customise their canes and make them more unique – it helps them to feel more comfortable and confident when they’re using it, and it can be a talking point for others too. It is fun to see how other people customise their canes – and if you want ideas on how to do it, then check out this video from Fashioneyesta.

And that’s all I have to say on it really. Because I don’t heavily use a cane myself at the moment, I don’t have a particularly strong opinion on it, as it doesn’t affect me directly, But my conclusion about it being personal choice seems to reflect what fellow bloggers like Elin and Holly and various others are saying. It’s certainly an interesting debate, so I hope you’ve liked reading my short take on it.

9 thoughts on “Using A Cane #HowISee”