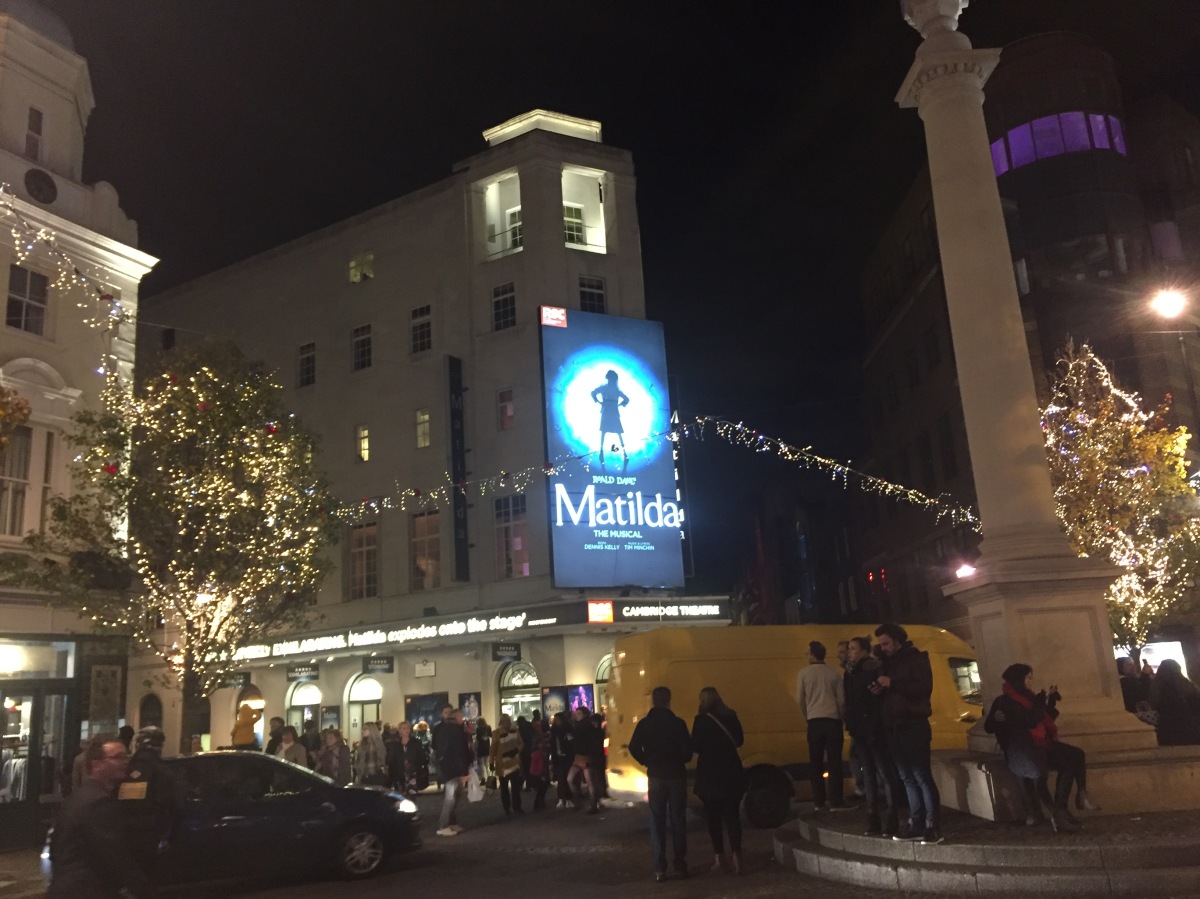 Recently I went to see Matilda The Musical at The Cambridge Theatre in Seven Dials, including a touch tour and audio description, and it was an amazing experience. So in this post I want to tell you a bit about it.

Firstly, a couple of hours before the performance, I went on a touch tour. This and the audio description are done about 4 times a year, and it’s all in-house by the theatre, so it’s not organised by VocalEyes this time. They also do captioned performances as well. Check out their accessibility page for info.

There were just 2 of us on the touch tour – myself and a young lad being guided by a lady who I assume was his mother. So it was great that the staff at the theatre did the tour just for us, as I didn’t know if they had a minimum requirement for numbers or not. And it meant we got very close personal attention, without having to wait for anybody else to look at things first.

So we got to go up on the stage to meet a few of the people who work behind the scenes on the show. They helped us explore the myriad of props on the birthday party table, as well as Matilda’s bedroom, the blackboard in the classroom and the school gates. As always with these kind of tours, it really helped to put everything in context and allowed us to hav familiarity as to what was on stage during the actual show. As an added bonus, I was also given one of the paper aeroplanes that the children throw into the audience during the show. They’re all folded up school reports, so mine is the report for Nigel Fleabottom! Unsurprisingly, Miss Trunchbull doesn’t like him very much! 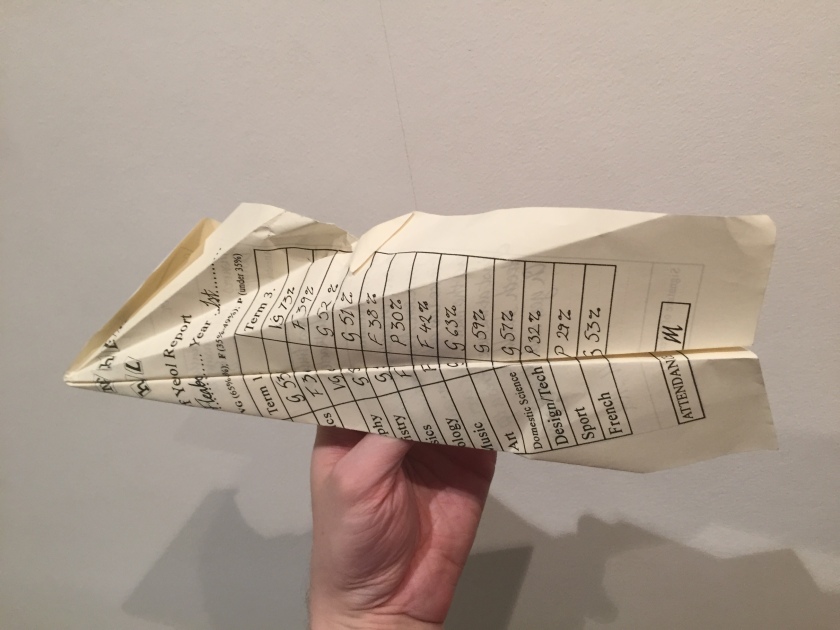 I then had audio description on a headset during the play itself, which worked really well. Unlike the VocalEyes earphones, which sit just in your ear, these were small headphones that go over your ears. But that didn’t stop you hearing the show – they’re not big enough to block out the sound, plus the sound of the play gets piped through the headphones along with the audio description anyway. So you don’t miss out on anything, and the description is really well done. You get all the information you need at the key moments without it interrupting anything. And it enabled me to pick out things that I wouldn’t have otherwise spotted, which was great. I was also using my monocular to look at things too, including when the description alerted me to something I hadn’t noticed. 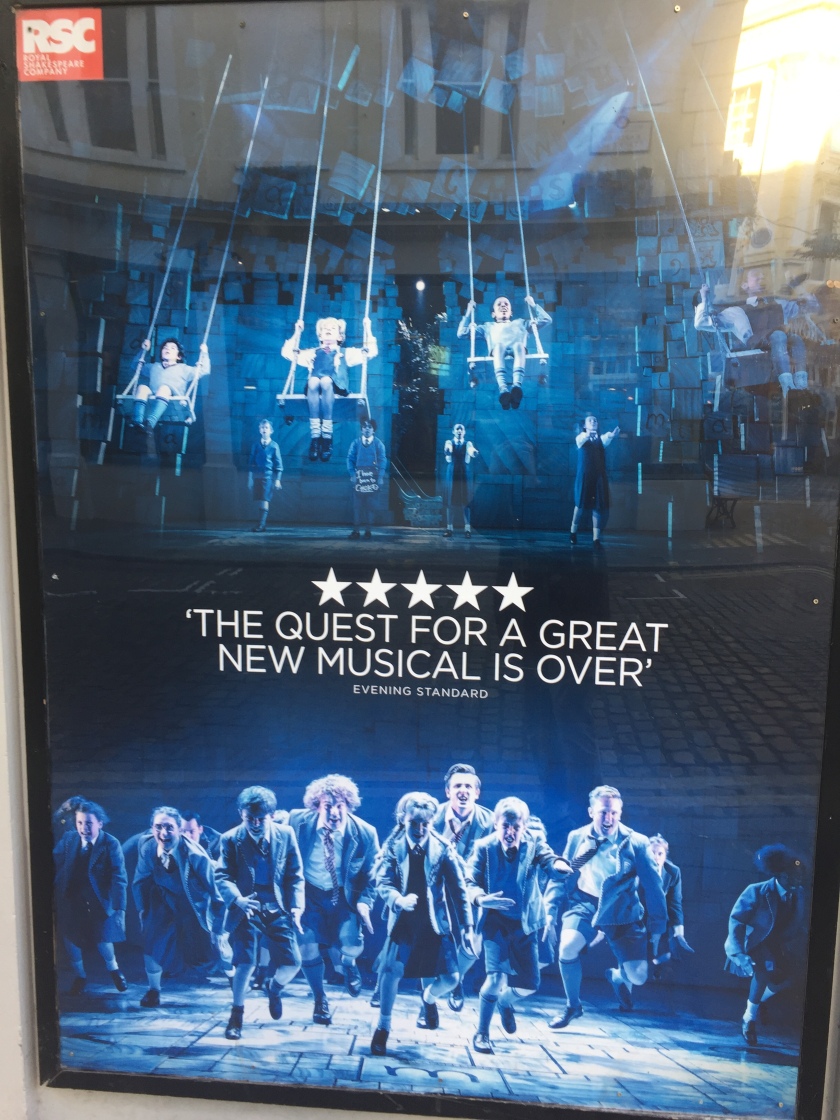 The most important thing, though, is the show itself. And it’s incredible. It’s based on the Roald Dahl book of course, but I haven’t read that since I was a kid. So I don’t really remember it and can’t make a comparison with the show. But in this musical the story moves along nice and swiftly, without feeling rushed. And it has lots of fun and humour, along with some emotional, tender moments too. And everybody in the cast is brilliant, including the guy playing Miss Trunchbull and the lady playing Miss Honey.

But the biggest praise has to go to the children, because they’re absolutely brilliant. They act superbly, they harmonise well when they sing, they’re wonderful dancers, and above all they’re clearly enjoying themselves when they perform!

And the big star of the show is, of course, Matilda Wormwood. There are multiple girls who play the role because of the regulations for children, so for this performance we had Emma Moore. And she was astounding. She has a huge amount to do, including lengthy monologues and lots to sing, and even speaking in a foreign language at one point! The page I linked to there claims that Matilda delivers over 2,500 words and has solo parts in 7 songs, during the 1 hour and 35 minutes she’s on stage, and that sounds pretty accurate to me. It’s an incredible amount, that most adult actors would find daunting I’m sure, and she nails it perfectly, making it look effortless and completely true to the character. She’s got a great singing voice too.

And the music itself is fantastic. Of all the musicals I’ve seen this year, the songs from this show have stuck in my head the most. Tim Minchin has composed songs that are enjoyable and thoughtful, with great orchestration and very clever lyrics. A lot of people will know him for his more adult comedy, so he may have seemed like an odd choice for composer – but it was a genius move. His command of both music and language shines through here.

When I Grow Up is the big number, and has sentiments that resonate with all of us from our own childhoods, and wishes that as adults we still wish were true! It’s an optimistc vision of the future from the children, coupled with our wistful looks back at the past as adults, so it really does tug at your heartstrings.

Songs like Naughty, Bruce and Revolting Children are also really great fun. And the School Song performed to the new arrivals at the gates incorporates the alphabet very cleverly, I love that. I downloaded the soundtrack after I got home, and it’s a joy to listen to. Even now, looking through the videos to include in this post, I still don’t get tired of hearing the songs and hearing the performances again, they’re really magical.

So all in all, it is an amazing play, which I highly recommend seeing. It’s fun, it’s funny, it’s sweet, and it’s really memorable for all the right reasons. It’s my favourite show of the year by far, although every show I’ve seen has been wonderful.

After the show, I also went for a wander around Seven Dials, Oxford Street and Regent Street to look at some of the Christmas lights and window displays, which all look great. So I’ll finish this post with my video of that. But do go and see Matilda The Musical if you can, it’s a great day out!

9 thoughts on “Matilda The Musical”

Made the most of the gorgeous #sunny weather with a lovely stroll around #WestHamPark today. Happy #Easter to everyone! 🌞🐣🌻
Had my first #CovidVaccination this morning. ✅ Very quick & easy, really friendly & helpful staff, still no side effects 2 hours later. Very relieved that I'm now protected, given that I'm a carer for my mother. Thank you so much to @NHSEngland & all the scientists for keeping us safe! 🥰🙌
What a year that was, huh? I certainly don't want 20/20 vision now if that's what I'll see! Still, while the year has thrown its challenges my way, I'm glad I've been able to navigate its stormy waters and get through it successfully. Many others haven't been so fortunate, however, and our thoughts are with all those whose lives have been turned upside down during these last 12 months for whatever reason.
Back in September I spent a day walking around some of the #Queen-related locations in #Hammersmith & #Kensington, following the Day 1 itinerary on QueenLocations.com. My intention was to find most of the locations listed on that site over a series of walks, but the weather and Covid restrictions have meant I haven't been able to explore any further yet.
#MerryChristmas to all my friends & followers! 🎅🎄 It's a strange and difficult one for us all this year, but I hope you're able to find some happiness, comfort & support, and can immerse yourself in things you enjoy. Don't forget Sarah Millican's #JoinIn community on Twitter, or the many groups on Facebook, or the various support organisations and charities out there, if you want people to talk to during the #festive season.
#AccessibleAdvent Day 24: