As mentioned in my Springing Into Action post, I didn’t go out and about much during March, due to illness and important things going on at home. But now I’m feeling better, I wanted to make the most of my free time over the Easter weekend, and make good use of my new Freedom Pass (which grants me free travel on the Tube, buses, etc, in London, and on local bus services elsewhere in the UK).

Consequently, of the 4 days from Good Friday to Easter Monday, I spent 3 of them going out for nice long walks (with a lazy Sunday at home in the middle). Photos from all the walks are on my Instagram, and there are video clips are on my Youtube channel.

So in the next few posts, I’m going to summarise the walks I took. And this first one is from Good Friday (14 April), which includes a review of a touring app I tried out.

One of the things I wanted to do over the weekend was try out some audio tour apps I had found for my iPhone. There are loads of them out there it would seem – some are completely free, some have free content but have more you can pay for, and some you have to pay for from the outset. So I had chosen a couple to try while I was out and about.

I do also want to go on group walking tours with other people of course, as there are some interesting ones out there to sign up for. But the advantage of audio tours is that you can do them at your own pace, whenever you like, and you can wander off to look at other things as and when you fancy. And as I’m still new to London, I want to start exploring various places by myself and seeing what I can find, while soaking up the atmosphere of the city in general. As much as I’m keen to meet new people as well, having a quiet wander around is also very enjoyable. It’s nice to have time to yourself sometimes I think. And besides, given that it’s Easter and I’m as guilty as anyone of eating more chocolate and sweet treats than usual, all the walking will hopefully offset the extra calories to some degree! 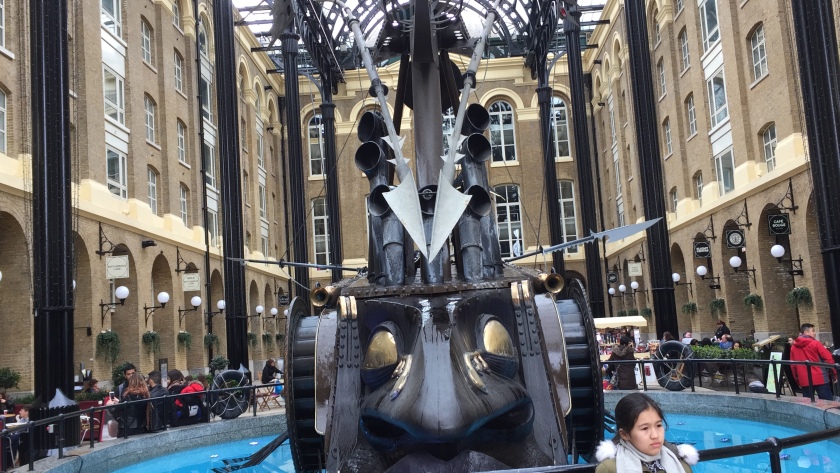 So, for my first outing, the app I tried was called Trail Tale, and I followed the Bridges to London City walk, which is completely free, and is basically a tour of the Southwark area. And it is an interesting tour, showing me quite a few places that I had no idea existed, and revealing new facts about places I had already known about.

As a result, I ended up taking lots of photos and video clips, because there was so much to see. The added benefit of doing this, for someone with reduced vision like me, is that I can then take those photos and videos home and study them more closely later, which often helps me to see things that I missed, and take my time reading signs and notices, as well as getting memories of the day to keep in general.

So the sights you can see in my photos and videos from the walk include:

However, the actual experience of using the app is quite frustrating. Visually, the white text on a light green background isn’t great contrast, although when inverting the colours it’s not too bad. And the text cannot be enlarged either – i.e. it doesn’t obey any font size parameters you may have in your global iPhone settings – so I either have to look closely at the phone, or use the Zoom feature, or use the 2-finger swipe down technique to get it to speak it, which isn’t ideal.

To be fair, that reduced accessibility isn’t limited to just this app, there are loads of apps out there that don’t make use of things like the phone’s font sizing (incidentally, kudos to Youtube for incorporating that in a recent update, even if it inevitably means lots of longer video titles now get truncated as a result). But it’s still a little frustrating when an app doesn’t do it. Being aware of, and making good use of, the phone’s accessibility features will always get a huge thumbs up and a well-deserved mention from me.

Still, like I say, I can work around text size issues. It would be nice not to have to do so, but I’m able to when necessary. The audio on the app, however, you can’t do anything about, and it’s not put together very well, at least for this tour. The issue here is that there’s been no real effort to do a proper, professional recording. It feels like they’ve thrown this poor lady, who clearly isn’t an experienced narrator or voiceover artist, into a quiet room with a tape recorder and told her to just record the text. I’m sure she’s a perfectly nice person, and her words are clear and understandable in fairness. But even so, compared to people who narrate TV documentaries or record talking books, and things like t hat, you can tell this isn’t her speciality. If it is her primary career, I apologise, but on this tour it didn’t feel like it.

What’s more, there doesn’t appear to have been any sound engineers or editors involved, either during or after the recording process. Or if they were, they weren’t paying much attention. The audio quality is quite variable at times e.g. the volume varies, or it can be a bit fuzzy now and again. And, most noticeably, they haven’t edited any mistakes out! There are a few occasions where she has to stop and go back to repeat herself, and they’ve left all of those outtakes in. That latter point makes the whole app feel very amateur. I’ve looked at a couple of reviews since and the app authors have asked the reviewers where the mistakes are – but really, all they have to do is listen to the recording, which somebody should have done in the first place before putting it on the app. The fact that they haven’t done any quality control is pretty bad really.

So it’s basically a reasonable app let down mainly by poor audio. Get that right – and they should as it’s essentially what you get it for – and they could be more on to a winner.

It was still a nice tour though, and it gave me a good long walk about, one of many I’m going to be having here in this wonderful city I think. I don’t think I’ll ever run out of places to explore here, it’s such a huge and varied and beautiful place, with so much to see and learn. Some of the novelty might wear off after a while I suppose, but it doesn’t feel like it will at the moment.

So that was my first walk of the weekend, and I’ll write about the other two in subsequent posts. But you can see them on Youtube and Instagram already if you’re keen to know where I went. And I hope everyone had a lovely Easter. I’m off to eat some of the hot cross buns we still need to get through. 🙂

Hannah; northern, live music fan, crazy cat lady, disability campaigner, maximising life with health conditions, blogging my adventures and banging on about anything that matters to me.